Today’s review is part of our month-long Special Series on Open Science Practices in addiction research. During this special series, The BASIS features recent publications that have used contemporary open science practices.

The authors adopted open science practices by pre-registering their protocol on the Open Science Framework and making this article available online through open access.

In both experiments, participants’ perceived usefulness and knowledge of payback percentage was similar, regardless of unclaimed prize information--meaning the graphical representation of the payback percentage did not increase their conceptual understanding of this statistic. This pattern of results suggests that although graphical depictions seem to weaken the influence of irrelevant but appealing information, they don't necessarily do so by increasing understanding. 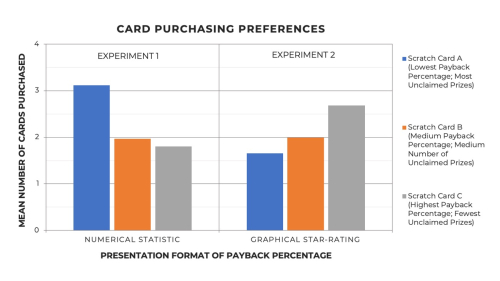 Every study has limitations. What are the limitations of this study?
This study was conducted with a hypothetical scratch card gambling scenario, so its findings may not be generalizable to real-world gambling contexts. Also, in Experiment 2, the graphics might have made the differences in the scratch cards’ payback percentages appear larger than they were intended to appear, despite the researchers' instructions.

For more information:
Are you or someone you know experiencing problems with gambling? Visit the National Council on Problem Gambling for screening tools and resources. For additional resources, including gambling and self-help tools, visit The BASIS Addiction Resources page.

________________
1. To investigate purchasing preferences, participants were asked to state how many of each type of card they would hypothetically purchase, if each card cost $5.00.

The problem with this analysis is that an unclaimed prize is not necessarily an unpurchased prize. It's entirely possible, and not necessarily irrational, for a player faced with the above scenario to think that with 10 tickets left (and there is no way posted information could be that current) the chances are pretty good that the one big prize has been purchased but not claimed. In fact, that's far more likely than the chance that the prize hasn't been purchased. However, with 10,000 cards available, the chance that a winner is still actually available is likely greater, and what the authors see as a less than optimal choice may, in fact, be the more rational option.