STASH, Vol. 16(2) - Who, what, where, and when? Examining adolescent substance use with routine activity theory

Today's review is part of our month-long Special Series on Theories of Addiction. During this Special Series, The BASIS features recent publications that investigate the application of theories and models to addiction science.

When studying why teenagers use drugs, it is important to consider the environments that allow substance use to occur: How do teens access drugs? Do friends encourage or pressure them to use? How often are they supervised? These questions are characteristic of routine activity theory (RAT), an approach to studying crime that considers the unique circumstances of an incident, rather than just the offender’s motives. This week, as part of our Special Series on Theories of Addiction, STASH reviews a study by Molly Block, Kristin Swartz, and Allen Copenhaver that examined how accessibility to drugs, supervision, and school environment relate to substance use in adolescent students through the lens of RAT.

What is the theory?
RAT was first proposed by Cohen and Felson in 1979 as part of the movement toward understanding crimes as events and opportunities for offenders, rather than considering the offender alone. Since its proposal, RAT has emerged as a popular way to explain crime events such as burglary and juvenile delinquency. RAT states that for a crime to occur, three conditions must be met at the same time and in the same place:

What was the research question?
What environmental factors at the individual and school level are related to adolescent substance use?

What did the researchers do?
The researchers analyzed data from a set of surveys that Kentucky public school students completed once a year from 2001 to 2004 (most from middle to high school; 3,976 students completed at least one survey). The surveys assessed use of marijuana, alcohol, tobacco, inhalants, and stimulants (i.e., cocaine, amphetamines, and methamphetamines) in the current school year. Students were also asked about factors the researchers believed might correlate with substance use. These factors were grouped into the categories student-level and school-level:

Block and colleagues combined survey answers from all four years into one data set, and used hierarchical logistic regression to test which factors predicted different forms of substance use in participants.

What did they find?
Each year on average, 34% of students used alcohol, 27% used tobacco, 14% used marijuana, 4% used inhalants, and 4% used stimulants. Marijuana, alcohol, and tobacco use were significantly related to many student-level factors, but not with many school-level factors. Having delinquent peers was one of the most predictive student-level factors. Few factors predicted inhalant and stimulant use, probably because few students used those substances (see figure). 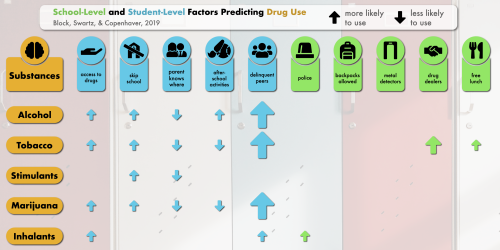 Why do these findings matter?
When considering an adolescent substance user’s circumstances using RAT, factors at the individual level appear to be more important than factors related to school climate, especially peer association. The role of parental monitoring and deviant peers shown in these findings contribute to a larger body of research highlighting the importance of supervision in early adolescence. Simply put, supervision by staff in school and by parents/guardians outside of school minimizes opportunity to use substances. Though school-level factors did not seem as important as student-level factors in predicting substance use, this is not to say school-level factors are unimportant. It is possible that school-level factors relate to factors like delinquent peer association in a way that was unmeasured.

Every study has limitations. What are the limitations in this study?
Survey data were collected almost twenty years ago, and trends in the use of some drugs might have changed, notably the recent emergence of vaping. Also, the sample was limited to Kentucky public schools, so it may not generalize to other school types or states. Self-reporting of personal drug use habits may have also caused inaccurate survey responses.

Posted at 07:30 AM in Science Threads on Addiction, Substance Use, and Health (STASH), Special Series | Permalink