« A Paradigm Shift | Main | STASH, Vol. 16(2) - Who, what, where, and when? Examining adolescent substance use with routine activity theory »

Today's review is part of our month-long Special Series on Theories of Addiction. During this Special Series, The BASIS features recent publications that investigate the application of theories and models to addiction science.

Recently e-cigarettes and vaping have become popular among youth, possibly because they are marketed as healthier than traditional cigarettes and come in flavors that appeal to kids, like cotton candy. However, adolescent e-cigarette use appears to predict later cigarette smoking, leading some to speculate that e-cigarettes are the new “gateway drug.” This week, as part of our Special Series on Theories of Addiction, ASHES delves into the history of the gateway hypothesis of substance use and its application to current trends in e-cigarette use.

The Gateway Hypothesis
In 1975, researchers observed that teenagers typically reported the same pattern in their substance use, beginning with alcohol and tobacco, progressing to marijuana, and then to other illicit substances (e.g., cocaine, heroin, methamphetamine). Soon after, the gateway hypothesis started to become popular. The idea is that using the initial drugs serves as a “gateway” facilitating the later use of other, “harder” drugs. The hypothesis emphasizes that these stages of drug use follow a consistent order and do not occur randomly. For example, cocaine use wouldn’t precede alcohol use.

Following the publication of that first study in 1975, the media and government began using the gateway hypothesis as a tool within the War on Drugs. The term “gateway drug” was attached not to the legal drugs (cigarettes and alcohol) that the paper focused on, but rather to the recreational use of marijuana as the root cause behind other illicit drug use. Nancy Reagan’s “Just Say No” campaign and programs such as D.A.R.E. are famous for educating young kids about the dangers of marijuana and the subsequent lifelong battle with substance use disorders and the law, once marijuana was no longer enough. President Reagan signed into law harsh minimum sentencing penalties for drug possession, exacerbating a decades-long trend of federal drug policies that disproportionately affected communities of color and increased incarceration rates of Black men.

Criticisms of the Gateway Hypothesis
While researchers do continue to find a typical sequencing of substance use among “hard” drug users, the gateway hypothesis remains open to criticism. For example, many people never progress beyond the “gateway” drug in question, contrary to the expected escalating substance use pattern. Additionally, some international studies find different sequencing of substance use, with each country’s cultural approach to alcohol, tobacco, and marijuana directly affecting the order in which individuals initiate different substances. Finally, most findings used to support the hypothesis can be explained equally well by the general liability theory, namely, that an underlying bio-psycho-social vulnerability to early substance use is at the root of the use of both “gateway” substances and other substances initiated at a later time point. Until now, the gateway hypothesis’s popularity has faded, with most evidence supporting other explanations. However, recent research on the emerging trend of youth e-cigarette use has revived it.

Are E-Cigarettes a Gateway Drug?
We’ll probably never know for sure if certain kinds of drug use cause subsequent drug use. But, strong evidence suggests such a link. For example, Berry and others studied a large group of youth from the Population Assessment of Tobacco and Health Study and evaluated the association between prior e-cigarette use and future cigarette smoking at the two-year follow-up. Kids who used e-cigarettes at baseline were four times more likely to start smoking cigarettes, and almost three times more likely to be smoking cigarettes at follow-up, than those who didn’t use any tobacco product at baseline. Kids who used other tobacco products (e.g. hookah, cigar, cigarillo) at baseline were also at higher risk for smoking at follow-up (see figure). More importantly, the researchers looked at several factors typically associated with vulnerability to substance use, including sensation-seeking and susceptibility to tobacco use. They found that the associations between e-cigarette use and later cigarette use were stronger for youth with low vulnerability, lending some support for a possible causal role of e-cigarette use (rather than a general liability) in the progression to cigarette use. 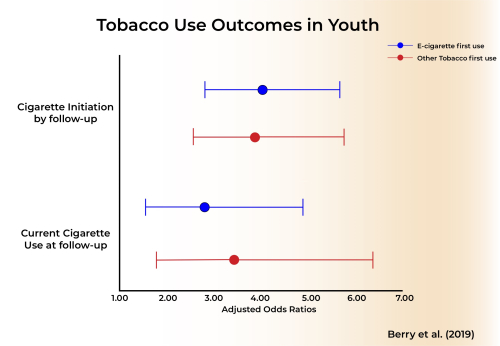 Figure: The plot represents the adjusted odds for reporting smoking (either ever, or currently) at follow-up, compared to youth who had not used any form of tobacco at baseline. The blue lines/circles represent kids who had used e-cigarettes at baseline and the red lines/circles represent kids who had used other tobacco products at baseline. For example, the blue point on the top line falls at 4.09. That means the youth who had used e-cigarettes at baseline were 4.09 times more likely than youth with no prior tobacco use to initiate traditional cigarette use by follow-up. The lines are a measure of the possible error in the confidence interval. Click image to enlarge.

What Are the Implications?
There is strong support for the idea that e-cigarette use predicts future smoking. However, other explanations of substance initiation like the general liability theory should continue to be investigated as well. Both ideas are supported by a substantial amount of evidence, and more robust research into causal mechanisms is needed. However, regardless of underlying causal mechanisms, it is clear that youth e-cigarette use is a strong marker for future smoking and should be intervened with as such.

For more information:
SmokeFree offers tools and tips quitting and maintaining abstinence from smoking tobacco. The Centers for Disease Control and Prevention offers information, tips, and tools about e-cigarettes and how to quit.