« The WAGER, Vol. 25(4) - Are safe gambling practices really safe for everyone? | Main | ASHES, Vol. 16(5) - Inside the mind of a teenager: Misconceptions of the nicotine strength in JUULs among high school students »

Drinking in excess is associated with numerous consequences including psychological and physical health problems, traffic fatalities and alcohol use disorder. In the U.S., rates of binge drinking (i.e., more than 4 drinks per occasion for women or more than 5 drinks per occasion for men) are persistently high, despite widespread public health initiatives. Despite policies1 designed to encourage responsible drinking behaviors, little is known about their impact on risky alcohol use. In this week’s DRAM, we review a study by Brian Fairman and colleagues that examined how 19 state-level alcohol policies in the United States might be associated with binge drinking patterns in adolescence and young adulthood.

What were the research questions?
What are the effects of state-level alcohol taxes, responsible drinking policies and local liquor store availability on trajectories of drinking among young adults?

What did the researchers do?
The researchers gathered three types of information: survey responses from young people from 22 U.S. states for every year over a five-year period, starting in 2010 when they were in 10th grade; descriptions of their states’ alcohol-related policies2 and beer excise tax rates; and the number of liquor stores within 1 kilometer of each respondent’s home. Next, they used group-based trajectory modeling to determine: (1) how often each respondent engaged in binge drinking during each year between 2010 and 2015, and (2) if there were differences in these drinking patterns over time based on a participant’s state-level alcohol policies and proximity to liquor stores in their community. 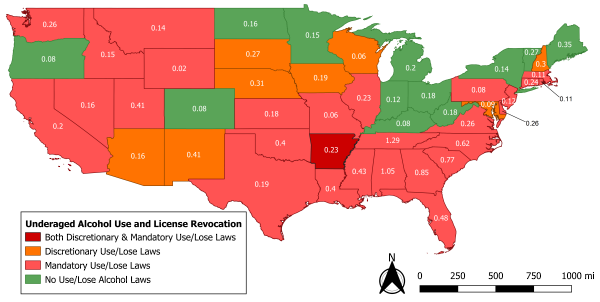 Why do these findings matter?
The results are important for developing public health interventions to reduce binge drinking and other types of risky alcohol use. Policies and excise taxes appear to be more important for predicting drinking behaviors than liquor store availability, so states should consider these findings when developing policies. For example, enacting zero tolerance laws for underage DUI and higher taxes on alcohol might be effective in reducing risky drinking patterns among young adults. In addition to policy changes, successful interventions such as social media-based programs to promote healthier alcohol use and the use of text messages to encourage responsible drinking could potentially reduce unhealthy drinking patterns to an even greater degree.

Every study has limitations. What are the limitations in this study?
While this study examined how policies are associated with drinking behavior, the relationship might not be causal because other unmeasured confounding variables could also have influenced binge drinking involvement. Also, using self-reported data may also reduce the validity of the findings, because respondents might not accurately report their drinking behaviors. Moreover, confusion about what defines “one standard drink” of alcohol might also lead to under- or overestimates of one’s actual alcohol intake and binge drinking frequency.

For more information:
The National Institute for Alcohol Abuse and Alcoholism has tips and resources for people struggling with problem drinking. For drinking self-help tools, please visit The BASIS Addiction Resources page. For more information about Open Science practices, check out the OSF website.

[1] Historically, states have implemented several policies to reduce excessive drinking, especially among young people. These policies include a 21+ drinking age (passed in 1984), restrictions on public consumption of alcohol, and severe legal penalties for driving while intoxicated.

Posted at 10:24 AM in The Drinking Report for Addiction Medicine (DRAM) | Permalink