« Caring for Others with Addiction During a Time of Uncertainty and Social Distancing | Main | STASH, Vol. 16(4) – Conduits of change: First responders as treatment initiators following an overdose »

Laws that ban smoking in public spaces, like restaurants, parks, and workplaces, reduce harms related to cigarettes and secondhand smoke. However, many U.S. states have yet to introduce legislation regulating public use of the alarmingly popular e-cigarette. Many people do not consider public smoking bans applicable to vaping, so bans specific to public e-cigarette use, or aerosol-free policies, are likely necessary. But could aerosol-free policies encourage people to cut down on e-cigarette use? This week, ASHES reviews a study by Boram Lee, Hsien-Chang Lin, and Dong-Chul Seo that examined the relationship between states with and without aerosol-free policies, and the vaping behavior of their residents.

What was the research question?
Do statewide aerosol-free policies, as well as age and smoking history, predict U.S. adults' e-cigarette use?

What did the researchers do?
Lee and colleagues analyzed data from 240,849 participants aged 18 to 591 in the 2016 Behavioral Risk Factor Surveillance System, a national survey administered by the Centers for Disease Control and Prevention. They excluded survey respondents from California, Vermont, and Washington D.C. because these areas introduced aerosol-free policies in 2016, the year of the survey. The survey assessed respondents’ age, state of residence, whether respondents regularly used e-cigarettes (either every day or some days), and whether they currently or had ever smoked cigarettes frequently. The researchers used chi-square and logistic regression tests to determine whether age, smoking history, and/or state of residence differentiated participants who used e-cigarettes from participants who did not use e-cigarettes.2 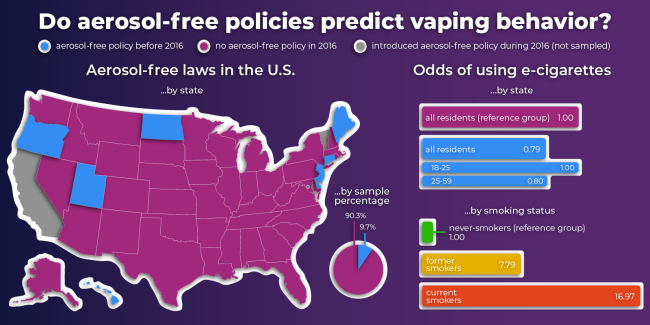 Figure: Left: U.S. states with and without aerosol free policies at time of data collection. States/territories with aerosol-free laws include Connecticut, Delaware, Hawaii, Maine, New Jersey, North Dakota, Oregon, Utah, and Puerto Rico (not pictured). Right: Odds ratios showing the likelihood of regularly using e-cigarettes, by residence in a state with or without public vaping policy (top) and by smoking history. Note that the effects of smoking history dwarf the effects of state. Click image to enlarge.

Why do these findings matter?
There are two main takeaways from this study. First, statewide aerosol-free policies could reduce e-cigarette use in older adults, but not necessarily younger adults. Vaping is more popular with younger consumers, who also vape more often in areas where smoking is banned, and either don’t know the harms of vaping or don’t care. Therefore, this age group might resist regulations. Second, smoking history predicted e-cigarette use far better than U.S. state, suggesting that stricter regulation of traditional cigarettes and providing viable methods to smoking cessation other than vaping would result in a greater reduction in e-cigarette use, rather than just banning vaping in public. That being said, aerosol-free policies have other possible benefits other than reducing vaping prevalence, such as preventing the renormalization of smoking in public spaces.

Every study has limitations. What are the limitations in this study?
These results are cross-sectional, so causality cannot be determined; e-cigarette prevalence could influence policy, and/or vice versa, and/or an unmeasured third variable could influence this relationship. The researchers only studied statewide policies, but the relationship between regulations and vaping behavior could differ between municipalities within states as well.

For more information:
SmokeFree offers tools and tips for quitting and maintaining abstinence from smoking tobacco. The Centers for Disease Control and Prevention offers information, tips, and tools about e-cigarettes and how to quit.

[1] The researchers excluded respondents aged 60 and older because not enough participants in this age group used e-cigarettes for proper analysis.

[2] In all analyses, the researchers controlled for sociodemographic variables including age, sex, race, education, and household income. They also accounted for smoking prevalence by U.S. state in 2016 and for clustering of participants by state in their regression models.