« The WAGER, Vol. 25(5) – Does gambling really lead to crime? A closer look. | Main | No Time Like The Present: The BASIS Special Series on Race and Addiction »

The DRAM, Vol. 16(6) - What is the link between childhood adversity and binge drinking during pregnancy?

Adverse childhood experiences (ACEs) (e.g., abuse and neglect, domestic violence, household dysfunction) can have profound and lasting impacts on health and well-being. ACEs are associated with poor physical and mental health, substance misuse, and risky health behaviors in adulthood. Pregnant women with a history of ACEs are more likely to experience negative mental health outcomes and engage in risky behaviors, including drinking alcohol while pregnant. Binge drinking during pregnancy is particularly harmful to a pregnant woman and her fetus. This week, The DRAM reviewed a study by Cheryl L. Currie and colleagues that investigated the association between maternal ACEs and patterns of binge drinking during pregnancy.

What was the research question?
Is a woman’s history of ACEs associated with her tendency to binge drink during pregnancy? 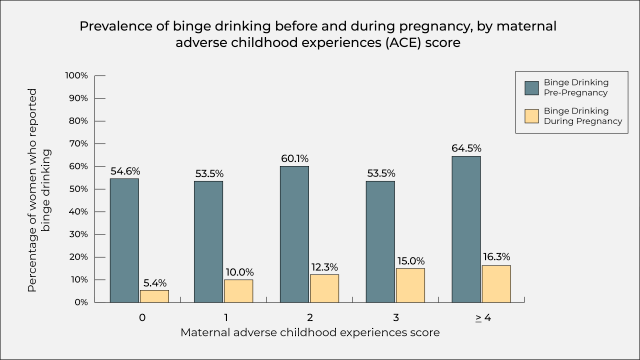 Figure. Percentage of participants who engaged in binge drinking before pregnancy and during pregnancy, by maternal adverse childhood experiences (ACE) score. Click image to enlarge.

Why do these findings matter?
Women who have experienced adversity in childhood may be a vulnerable subgroup with increased odds of binge drinking during pregnancy. This finding supports the case for implementing universal screening of ACEs as part of routine prenatal care. Given that many women report at least one ACE, a better approach to addressing ACEs is to improve integration of behavioral and mental health services within primary and prenatal care settings. This proactive approach would make mental health care more accessible to women of child-bearing age and reduce the costs and stigma associated with such care.

Every study has limitations. What are the limitations of this study?
Participants’ binge drinking behavior and history of ACEs may have been under-reported because the data was self-reported. The researchers’ definition of binge drinking (i.e., five or more alcohol-containing drinks on one occasion) is different from the standard definition of binge drinking for women (i.e., four or more alcohol-containing drinks on one occasion). Therefore, the findings of this study are under-representative of the actual prevalence of binge drinking according to the standard definition. Lastly, the findings of this study may not be generalizable; study participants were more likely to be married and reported higher income and educational levels compared to the national average.

For more information:
Are you concerned about your drinking patterns? You can find information and self-help resources online at the National Institutes of Health’s Rethinking Drinking website. For drinking self-help tools, please visit our Addiction Resources page.

[1] Binge drinking pre-pregnancy was assessed before 25 weeks gestation with the question: “In the 12 months before you became pregnant, did you ever drink five or more alcohol-containing drinks on one occasion?”

[2] Binge drinking during pregnancy was assessed between 34 and 36 weeks gestation with the question: “Since becoming pregnant (including before you knew you were pregnant), did you ever drink five or more alcohol-containing drinks on one occasion?”

[3] The questionnaire assessed experiences of adversity before age 18 in eight categories. Questions were adapted from the original ACE checklist.

Posted at 10:11 AM in The Drinking Report for Addiction Medicine (DRAM) | Permalink