« ASHES, Vol. 16(5) - Inside the mind of a teenager: Misconceptions of the nicotine strength in JUULs among high school students | Main | The WAGER, Vol. 25(5) – Does gambling really lead to crime? A closer look. »

The erosion of economic opportunities has long been tied to diseases of despair such as drug overdoses, suicides, and alcohol-related liver disease. Like the current coronavirus pandemic, the closing of automotive plants are significant events that, in one fell swoop, can ravage a community’s economy. While tragic, these events present a unique opportunity to examine the direct effects of economic erosion on health and wellbeing. This week, we review an article by Atheendar S. Venkataramani and colleagues that investigated the association between automotive assembly plant closures and opioid overdose mortality in 112 manufacturing counties across the United States.

What was the research question?
Is the closing of automotive assembly plants associated with opioid overdose mortality in the United States?

What did the researchers do?
The researchers identified 112 counties within commuting distance of one or more automotive assembly plants. They counted counties as exposed if, anytime during the study period (January 1, 1999, to December 31, 2016), there was a plant closure in the commuting zone. There were 29 such counties. They counted counties as unexposed if there were no closures within the commuting zone during the study period. There were 83 such counties. The primary outcome measure was county opioid overdose mortality rate among adults aged 18-65.1 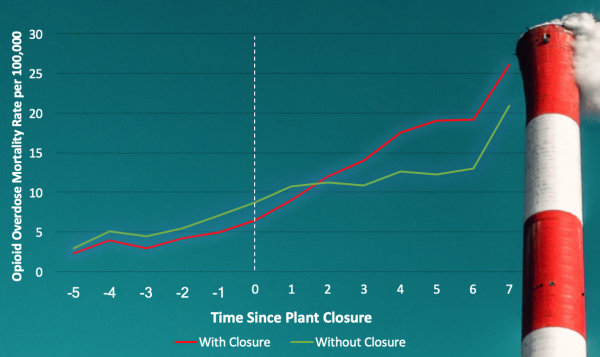 Why do these findings matter?
This study furthers the notion that economic hardship, particularly job loss, may lead to increase in opioid overdose mortality. Importantly, it furthers the notion that external factors such as economic erosion play a significant role in addiction and that the disease can be a product of circumstance. Hopefully this understanding will help reduce the stigma surrounding drug addiction and overdoses. It is also a poignant reminder to health care providers and policy makers that the most effective treatments for such a complex disease will likely require a more holistic approach. Treatment options that provide job training may be of particular interest for future investigators.

Every study has limitations. What are the limitations in this study?
The study relied on a proxy for decrease in economic opportunity (automotive plant closure). These events impose a large-scale and often abrupt shock to a community. These findings may not generalize as other examples of economic decline may not be as dramatic. Additionally, the sample of manufacturing counties included only reflect a small fraction of the U.S. population (2.7%) and may not be representative of the nation as a whole.

[1] This data was obtained from individual-level death certificate data from the US National Center for Health Statistics and population estimates from the U.S. Census Bureau.

Posted at 08:00 AM in Science Threads on Addiction, Substance Use, and Health (STASH) | Permalink