« STASH, Vol. 16(5) - Automotive assembly plant closure and opioid overdose mortality rates: Is economic opportunity the difference between life and death? | Main | The DRAM, Vol. 16(6) - What is the link between childhood adversity and binge drinking during pregnancy? »

There are many popular depictions of people who resort to crime to make up for gambling debts, such as movies like Uncut Gems and Lock, Stock, and Two Smoking Barrels. But do high levels of gambling actually cause involvement in crime? The WAGER reviews a paper by Christopher Dennison and colleagues which finds that the negative consequences of gambling do not lead otherwise law-abiding people to commit crimes. Rather, the types of people who are interested in gambling tend to have an above-average willingness to commit crimes even before their debt becomes unmanageable.

What was the research question?
Does problem gambling predict later involvement in crime even after taking into account background characteristics that predict both gambling and crime?

What did the researchers do?
The authors drew upon a nationally representative dataset of U.S. adolescents who were assessed on background characteristics such as socioeconomic status, academic performance, age, gender, religious involvement, and personality traits in 1994-1995. In 2002-2003, the same respondents reported on their lifetime gambling involvement, and in 2008-2009 reported on their criminal history in the past twelve months. The authors first looked to see if problem gambling status in 2002-2003 predicted criminal behavior in 2008-2009 without regard to background characteristics. 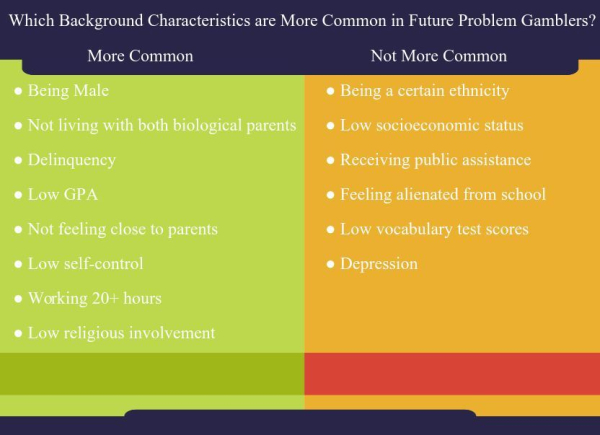 Why do these findings matter?
Interventions that reduce gambling will not also reduce crime, but policymakers can reduce both problem gambling and crime by reducing risk factors (see Figure) that are apparent at least as early as adolescence.

Every study has limitations. What are the limitations of the study?
Background characteristics, problem gambling, and criminal involvement were all measured by self-report. It is possible that more objective measures would reveal a stronger association between gambling and crime, even after taking common causes of gambling and crime into account.

Posted at 08:49 AM in The Worldwide Addiction Gambling Education Report (The WAGER) | Permalink

Gamblers do not become better mannered and do not improve their strength of character from their gambling. Criminals usually have poor manners and are usually weak willed. Most end up in jail, sooner of later.

Well mannered criminals with strong wills, whose crimes are not prosecuted, can go very far in life; Trump was elected President, despite his character flaws and many, many crimes, none prosecuted to sentencing -- he pleaded no contest and paid fines sometimes.