ASHES, Vol. 16(5) - Inside the mind of a teenager: Misconceptions of the nicotine strength in JUULs among high school students

JUUL e-cigarette use has been on the rise recently, with 9.5% of teenagers ages 15-17 and 11.2% of young adults ages 18-21 reporting JUUL use at some point throughout their lifetime. In fact, e-cigarette use among teenagers is now more common than cigarette use. Despite the fact that JUUL use is so common, many teenagers are not aware that nicotine is inside their JUUL, let alone how strong the nicotine is. This week, ASHES reviews an article by Meghan Morean and her colleagues looking at teenagers' beliefs regarding the strength of nicotine in JUULs, before and after learning information about the actual nicotine content of JUULs.

What was the research question?
What are teenagers' perceptions of the nicotine strength in JUULs before and after learning its actual nicotine content, and do these perceptions differ by JUUL-use status?

What did the researchers do?
The researchers surveyed 3,170 students from four high schools in Connecticut. Students reported their past-30-day and lifetime JUUL use. Participants rated the strength of nicotine in JUUL pods (low, medium, high, or I don’t know) before and after learning that the actual concentration of nicotine in JUULs is 5%. (Participants weren’t told that 5% is a substantially higher nicotine content compared to other tobacco products.) Participants also indicated whether they believed JUULs are e-cigarettes. The researchers categorized students by JUUL use status (past-30 day, ever users, never users). They used a generalized estimating equation model to look how participants’ beliefs changed and whether any changes were related to JUUL-use status. 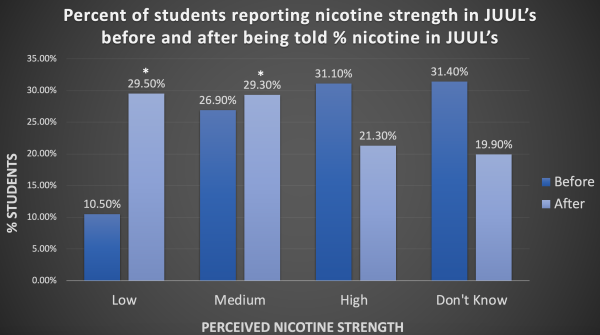 Figure. The percentage of individuals reporting nicotine strength in JUULs as low, medium, high or “I don’t know” before and after being told that the actual nicotine content in JUULs is 5%. * Indicates responses that were significantly different from “High” after information about nicotine content was given. Adapted from Morean et al. (2019). Click image to enlarge.

Every study has limitations. What are the limitations of this study?
Though the students in this study were told that JUULs contained 5% nicotine, the JUUL packaging at the time stated that JUULs were "5% strength." Therefore, many users may not have understood that this percentage corresponded to nicotine content even if they had seen this information on the label. Additionally, students were given four options to rate the strength of nicotine, but it is difficult to know whether all students had the same perceptions of low, medium and high nicotine strength. Future research could test students' perceptions of nicotine strength using comparisons to other nicotine products, such as cigarettes.

For more information:
SmokeFree offers tools and tips for quitting and maintaining abstinence from smoking tobacco. The Centers for Disease Control and Prevention offers information, tips, and tools about e-cigarettes and how to quit.

Thank you for this post. This study brings to mind how teenagers perceive THC levels in cannabis products.