« No Justice, No Peace: Racism Is A Public Health Issue | Main | When Justice for Black People Begins, the Looting Will Stop »

The DRAM, Vol. 16(7) - What is the role of racism in the development of alcohol problems among African American young adults?

We are in the midst of widespread social movement in support of racial equality and anti-racism. This includes developing a better understanding of how experiences with racism can contribute to health disparities. While research shows that African Americans drink less yet suffer from higher rates of alcohol-related problems than other racial groups, little is known about the impact of racism on drinking or the potential protective effects of racial socialization (i.e., learning to feel pride in one’s racial/ethnic group, learning how to cope with racial bias, and becoming prepared for bias). In this week’s DRAM, part of our Special Series on Race and Addiction, we review a study by Jinni Su and colleagues that examined how experiences of overt racism and more subtle racism (i.e., microaggressions) were associated with drinking and drinking problems among African American young adults.

What was the research question?
What is the role of racism in the development of alcohol problems among African American young adults?

What did the researchers do?
Respondents—383 African American students at a large public university—reported1 how often they experienced overt racism and microaggressions, experiences with racial socialization by parents and friends, and both frequency of alcohol use and negative consequences related to drinking. Next, the authors used hierarchical linear regression models with control variables including gender and parental education to determine: (1) whether there is a positive relationship between experiences of racism, drinking frequency and alcohol-related problems, and (2) whether racial socialization can protect against the adverse effects of racism on alcohol use behaviors.

What did they find?
Experiencing microaggressions was positively associated with drinking more and having more severe alcohol problems, whereas experiencing overt racism only predicted more severe alcohol problems. Racial socialization in the form of instilling pride in one’s racial/ethnic group by friends reduced the effects of experiencing overt racism on the two outcomes (see figure for racist events and alcohol problems model). Racial socialization by parents did not influence the relationship between either racism indicator and the drinking measures. 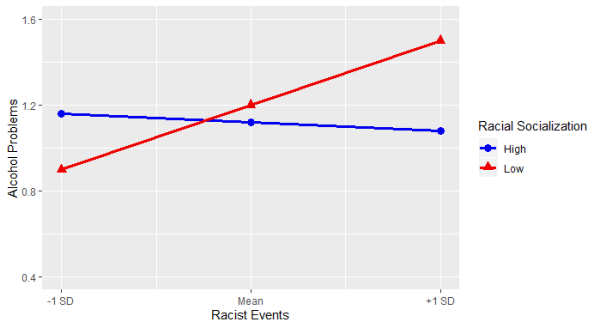 Why do these findings matter?
The results are important for developing greater scientific and public awareness about the pervasive public health consequences of racism. Importantly, this study showed that racism is associated with alcohol-related problems among African Americans, regardless of the type of racism (i.e., microaggressions and overtly racist events). The harm from individual, systemic and institutional racism is far-reaching, and an anti-racism education curriculum—along with positive racial socialization by peers—might help reduce racism and related adverse outcomes. Moreover, this study highlights the need for substance use intervention programs that are culturally relevant for each racial and ethnic group, instead of relying on a one-size-fits-all approach. Recent research has revealed that drink refusal and social pressure skills training have different impacts for African American and white participants, emphasizing the importance of targeted, culturally relevant programs for addiction treatment.

Every study has limitations. What are the limitations in this study?
The respondents in the sample were primarily female (i.e., 81%) and were all African American, so the results might not generalize across genders or to other racial and ethnic groups. Recall bias might have also affected respondents’ reports of racism and drinking behaviors due to difficulties in remembering past events.

In response to recent events, mental health professionals and others have been increasingly focused on mental health as it pertains to racism. Many of these discussions, as well as resources on health equity in general, can be found on the American Public Health Association and American Medical Association websites.

Posted at 08:30 AM in Special Series, The Drinking Report for Addiction Medicine (DRAM) | Permalink