« ‘Uncomfortable’ is Not Enough: Integrating Anti-racism within Addiction Treatment | Main | No Justice, No Peace: Racism Is A Public Health Issue »

The WAGER, Vol. 25(6) - Which came first, the chicken or the egg? The temporal relationship of substance use and problem gambling among African American and White Adolescents and Young Adults

It is well established that race is a social determinant of health. African Americans in the United States are disproportionately impacted by many medical conditions such as breast cancer, child birth complications, diabetes and obesity. Even the recent coronavirus pandemic has impacted African Americans significantly more than White Americans. Although a lot of research has looked at health disparities in general, little research has looked at the racial differences among gambling for adolescents and young adults. This week, as part of our Special Series on Race and Addiction, The WAGER reviews an article by Kimberly Werner and colleagues that looked at the gambling and substance use initiation among African American and White American adolescents and young adults.

What was the research question?
Do gambling and substance use initiation patterns among adolescents and young adults differ by racial group?

What did the researchers do?
Wernet et al. used data from the multi-wave Missouri Family Study, which sampled families with children who were at risk for alcohol abuse. (Details of the study method can be found here.) The total sample consisted of 1349 African American and White adolescents and young adults. Participants reported the age at which they began gambling and using alcohol, tobacco, and cannabis, as well as symptoms of mental health disorders. The researchers conducted a regression analysis to assess the temporal relationship between substance use initiation and gambling behaviors. The researchers included psychiatric comorbidities, socioeconomic status, and family-risk status of alcohol use as covariates. In addition to looking at the sample as a whole, they broke down the results by gender and race.

What did they find?
As of their most recent interview (around age 20), African American males were slightly more likely to have ever gambled compared to White males,1 but were less likely to have ever used alcohol or tobacco. (There was no difference in rates of cannabis use between these two groups, or in rates of overall gambling/substance use between African American and White females.)

Then the researchers examined patterns of when participants started to gamble and use each substance. For alcohol, participants most commonly reported having only ever used alcohol (and never gambling), followed by never gambling or drinking (see Figure). Among participants who did both, a race difference emerged: African American males were more likely than White males to begin gambling before starting to drink, while White males showed the opposite pattern. African American females were more likely than White females to have gambled before or at the same age as starting to drink and were less likely to use alcohol alone (see Figure). The pattern was the same for tobacco use. There was no race difference for cannabis use. 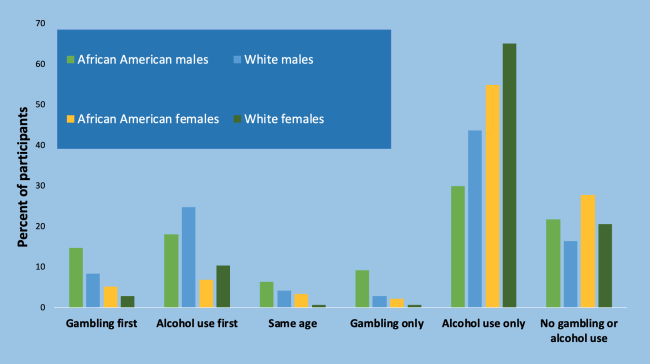 Figure. Percentage of individuals reporting various orders of initiation of gambling and alcohol use by race and gender. Click on figure to enlarge.

Why do these findings matter?
This study suggests that gambling might be more of a “gateway” to future substance use among African American males than White males. Therefore, interventions that succeed in reducing gambling among African American boys might have additional protective effects on future substance use. Identifying these kinds of differences is the first step among many in working towards targeted interventions. For example, other researchers have established guidelines for how mental health providers can use existing health disparities/service use research to help inform their practice. However, it’s important to keep in mind that African American males were less likely to use alcohol or tobacco than White males.

Every study has limitations. What are the limitations of this study?
The sample was composed of Midwest residents and families with children who were at high risk for alcohol abuse. For these two reasons, the sample is not representative of the entire United States population. In addition, this study did not include race-specific stressors, such as discrimination, into the analyses as a covariate. Future research could conduct the same study but with a more representative sample with the additional measures of race-specific stressors.

[1] 48.3% of African American males reported gambling at least once in their life compared to 40.1% of white males who reported ever gambling. This difference did not reach the authors’ adjusted level of statistical significance.

Posted at 09:56 AM in Special Series, The Worldwide Addiction Gambling Education Report (The WAGER) | Permalink