« The DRAM, Vol. 16(7) - What is the role of racism in the development of alcohol problems among African American young adults? | Main | Who Protects US? »

When Justice for Black People Begins, the Looting Will Stop 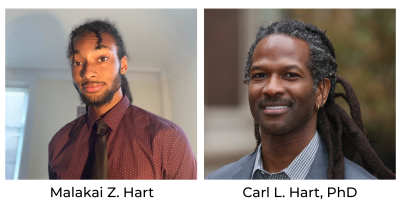 Editor’s note: This op-ed was prepared by Malakai Z. Hart and Carl L. Hart, PhD. Malakai Hart is a student at Columbia University. Carl Hart (@drcarlhart) is a professor of psychology and psychiatry at Columbia University and the author of the forthcoming “Drug Use for Grown-ups: Chasing Liberty in the Land of Fear.” Mr. Hart and Dr. Hart prepared this op-ed is part of our Special Series on Race and Addiction.

The repulsive killings of Breonna Taylor—a 26-year old Black woman—and George Floyd—a 46-year old Black man—have spurred broad protests around the globe, shining a spotlight on American racism and police brutality against Black people. While these gruesome acts have forced many individuals and institutions to self-examine their roles in perpetuating centuries of anti-Black racism, there remains a substantial proportion of Americans, largely white, who are preoccupied with maintaining the social order, even if it means that authorities are permitted to treat Black people less humanely than white people. That, by the way, is the definition of white supremacy.

And a major deflection strategy of white supremacists is to move the focus of attention away from the real problems that Black people face to trumped-up less important issues. For example, the Trump administration, abetted by multiple media outlets, has demonstrated far more concern about isolated instances of looting during lawful protests than they have the conditions that necessitated wide-scale public demonstrations. Perhaps activist Tamika Mallory said it best when she addressed the media at a justice for Mr. Floyd rally: “We are tired. Don’t talk to us about looting. Y’all are the looters. America has looted Black people. America has looted the Native Americans when they first came here. Looting is what you do. We learned it from you. We learned violence from you.”

Ms. Mallory’s words are particularly instructive here for at least two reasons. First, they highlight the inconvenient, but too often ignored, fact that our founding fathers obtained this country through violence. Indeed, violence perpetuated by the American government—and supported by its citizens—has become the norm for at least three decades. Generation Z’ers, me included (MH), have yet to see a day in which our country was not at war. The wars in Iraq and Afghanistan are just two examples. For these reasons, the pearl-clutching complaints about sporadic looting ring hollow and expose the hypocrisy in the actions of too many fellow citizens.

Second, we cannot allow insincere rhetoric to distract us from focusing on and trying to solve the real problem: the killing of Black people by police, who are rarely held accountable. The officers who killed Breonna Taylor have not even been charged. Former Minneapolis police officer Derek Chauvin—who pressed his knee into Mr. Floyd’s neck until he became unresponsive—has been charged with killing Mr. Floyd. Undoubtedly, in the months leading up to the trial, we can expect Mr. Chauvin’s supporters to deflect blame from his brutal act onto the drugs found in Mr. Floyd’s body at the time of his death. Mr. Floyd’s toxicology report revealed that he had 19 nanograms per milliliter of methamphetamine and 2.9 nanograms per milliliter of tetrahydrocannabinol (THC) in his system. These amounts are negligibly small and suggests he hadn’t used drugs in at least several hours, maybe 24 hours, and could not have contributed to his death.

He also had 11 nanograms of fentanyl in his system. But that number alone can’t tell us anything about Mr. Floyd’s level of intoxication before his death, because the concentration of fentanyl in the blood increases significantly after a person dies (Reiter et al. 2019). In addition, the same dose of fentanyl that produces blissfulness in a tolerant user can lead to an overdose in a naïve user. That’s why we have to interpret Mr. Floyd’s behavior—which is a barometer of a person’s impairment—shortly before being killed.

Mr. Floyd can be seen, in videos of the encounter, behaving rational and emotionally appropriate. Minutes before his encounter with police, he purchased an item from a deli and was about to leave when officers asked him to get out of his car. Together, these observations show how unlikely it is that drugs played a role in his death. People on the verge of dying from an opioid overdose look visibly drowsy and inactive. He was neither. The only relevant factor that is evident was Chauvin’s knee on Mr. Floyd’s neck. Compressing Mr. Floyd’s airway is far, far more likely to bring about death than any drug use.

But, if history is any indication, this information won’t stop Chauvin’s supporters from touting the “drug-crazed negro” defense. The mere suggestion that Mr. Floyd’s drug use contributed to his death is a tried-and-true ruse used to create sufficient reasonable doubt, so that authorities and juries can find white police not culpable in the killing of Black people. Some version of this deceitful tactic was used to absolve police of responsibility when they killed Michael Brown, Rumain Brisbon, Terence Crutcher, Derrick Scott, and countless others.

The drug-crazed negro myth is effective for multiple reasons. Chief among them is the tacit American agreement that judges the humanity of any white person above that of their Black counterparts. If this were not the case, pervasive police brutality against Black Americans would have long ago ceased. Imagine, if you will, that Philando Castile was white, that he was shot and killed by Minnesota police officer Jeronimo Yanez as he sat defenseless in his car alongside his white girlfriend and her white 4-year-old daughter during a routine traffic stop, and that his girlfriend livestreamed the entire gruesome killing for the world to witness. Officer Yanez said he shot Castile because he reeked of marijuana. Does the white Philando Castile deserve to be executed? Well, Castile wasn’t white. He was Black and now he’s dead.

Yanez was acquitted of all charges.

Another reason the myth continues to work is because so-called drug experts and scientists have been complicit. This group consistently exaggerates the harmful effects of drug use. Admittedly, negative drug effects can and do occur, but the fact is: the totality of drug effects is overwhelmingly positive (e.g., Hart et al. 2008; Keith et al. 2017). Furthermore, drug researchers have been conspicuously silent when authorities use drugs to legitimize police misconduct. They have been similarly absent from the public discourse on why a Black person might run away from the police. Given the long history of police brutality against Black people, any social scientist worth her salt understands that running from the police under these conditions can be viewed as rational behavior. Thus, it is not surprising that 27-year old Rayshard Brooks—who was Black man—ran away from Atlanta police—who shot and killed Brooks—during an encounter on June 12, 2020.

Given America’s long history of denying anti-black racism in the face of overwhelming evidence to the contradictory, it is no wonder that this generation is finally willing to destroy institutions and property that preserve white supremacy. We are not only unsurprised by recent uprisings, but proud to be active participants. To do otherwise is wholly un-American.

Posted at 10:01 AM in Op-Ed/Editorials, Special Series | Permalink

What I'm hearing from White friends: "They're hurting Black-owned businesses. They have no right to be violent. Protestors aren't using masks or distancing, and they're ruining it for the rest of us. They're hurting their own cause when they act like this. This isn't the way to bring about social justice. Enough is enough, protesting needs to stop and we need to get the economy going again." I reply, "What do you think is going to make it stop?" White friends repeat the above again, like broken record. Now I reply, 'When Justice for Black People Begins, the Looting Will Stop'

This article is concise and beautiful. Looting shouldn't stop until white supremacy is defeated.

This is the best analysis I've ever read! Looting is a trumped-up issue compared to the daily struggle of marginalized people