Substance use disorders (SUDs) are prevalent among hospitalized individuals and are associated with increased and recurrent utilization of hospital and emergency department services. Fifteen percent of inpatients have an active SUD, making hospitalization a unique opportunity for intervention. Multidisciplinary addiction consult teams (ACTs) that address a range of patient needs (e.g., pharmacotherapy, behavioral and educational interventions, treatment and resource linkage) have been found feasible and effective at improving treatment engagement for SUD after discharge. This week, STASH reviews a study by Dr. Sarah E. Wakeman and colleagues that investigated if addiction consultation during an inpatient hospital stay reduced the likelihood of 30-day hospital readmission among patients with a SUD.

What was the research question?
Does receiving an addiction consultation during an inpatient hospital stay reduce the likelihood of 30-day hospital readmission among patients with a SUD?

What did the researchers do?
The researchers reviewed records of admissions to Massachusetts General Hospital over a five-year period. They identified 4,719 unique patients who had experienced at least one ACT consult and calculated frequencies of consults, diagnosis codes, and 30-day readmission rates. Patients with an active SUD fell into 3 categories: (1) those who did not have an ACT consult until after admission, (2) those who had an ACT at the time of admission, and (3) those who were admitted without a current ACT consult, but had had a prior ACT consult. The researchers used generalized estimating equation (GEE) analysis to compare 30-day readmission rates among these 3 groups.1 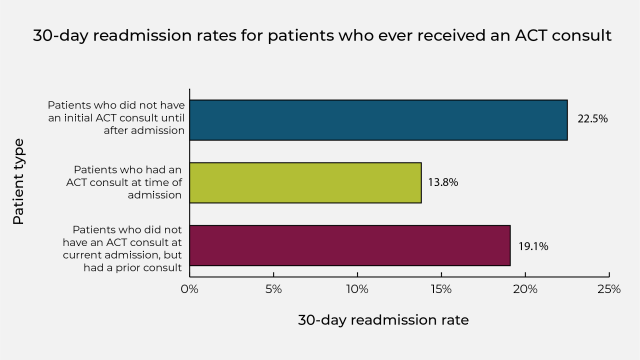 Why do these findings matter?
Individuals with a SUD are at higher risk of hospital readmission. The findings of this study indicate that addiction consultation may reduce the risk of 30-day hospital readmission among these individuals, and this impact appears to persist for subsequent admissions that do not involve ACT. ACT consults might be effective because they facilitate pharmacotherapy initiation, discharge planning, and linkage to ongoing addiction care. Future research could explore more precisely how ACT consults help. Integrating addiction consult teams into acute hospital care may be one way to decrease healthcare costs and facilitate long-term recovery.

Every study has limitations. What are the limitations of this study?
This study did not include a control group of patients who had never experienced an ACT consult. Additionally, this study only included data on admissions to Massachusetts General Hospital. Patients may have been readmitted to other hospitals during the study.

[1] The researchers excluded patients with 10 or more admissions from the analysis.