Recent media stories have highlighted the role of the bar environment in the spread of COVID-19. Bars are often cramped spaces, with few open windows and many groups of people drinking and socializing in close proximity to each other. As a result, they also have the potential to be sites of verbal and physical altercations. Furthermore, research shows that these altercations can be aggravated by the consumption of alcohol and by binge drinking. In this week’s DRAM, we review a study by Brian Quigley and colleagues that examined how mixing alcohol with energy drinks (“AmEd”) might increase the chance of aggression occurring in bars.

What was the research question?
What is the relationship between using alcohol mixed with energy drinks and being a victim of or perpetrating aggression in bars?

What did the researchers do?
Respondents—175 frequent bar patrons1 from Buffalo, New York—reported how often they drank AmED and non-caffeinated alcohol (“NCA”)2, how much they typically drank per drinking session, and the frequency with which they visited bars in the past 90 days. Respondents also recalled how often they were victimized by and how often they perpetrated six types3 of aggressive behaviors. For their first analysis, the authors studied how often respondents had been victims, or perpetrators, of bar aggression when they were drinking NCA vs. when they were drinking AmED. Next, they examined how the frequency of drinking AmED and NCA predicted victimization and perpetration rates (i.e., the number of aggression episodes divided by the number of days using either AmED or NCA), controlling for bar visit frequency.

What did they find?
Respondents used NCA more frequently than AmED. Consuming AmEd was associated with a greater frequency of both bar aggression victimization and perpetration. The analysis of rates of aggression showed that respondents were victimized more often when drinking AmED versus when drinking NCA only (see Figure for percentages). Likewise, respondents perpetrated bar aggression more often on AmEd drinking occasions than on NCA drinking occasions. The multivariate analyses controlling for frequency of bar visits revealed similar findings to the results from the bivariate analyses. 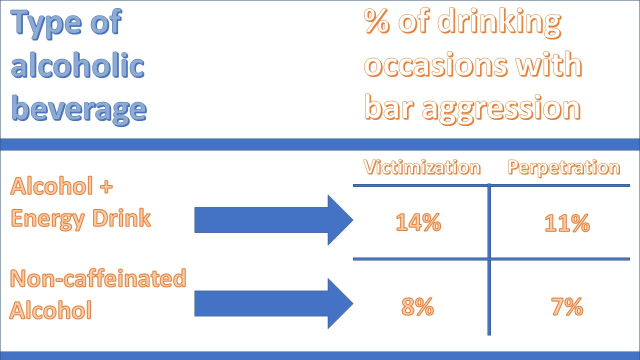 Figure. The figure shows relationship between drinking AmED and NCA, and the percentage of drinking occasions that involved aggression during the past 90 days for the total sample (n = 175; 78 men and 97 women). Click figure to enlarge.

Why do these findings matter?
The results are important for developing greater scientific and public awareness about the potential dangers of consuming alcohol and energy drinks together. Government regulators have already banned the sale of packaged drinks containing alcohol and caffeine together such as Four Loko, yet mixed drinks with both substances are readily available at establishments that serve alcohol. As restaurants and bars begin to re-open during the loosening of Coronavirus lockdowns, policy makers, bartenders and security staff should be particularly focused on AmED, which might increase physical conflict and in turn elevate the risk of spreading COVID-19.

Every study has limitations. What are the limitations in this study?
The respondents in the sample (and likely, the bars and clubs they frequented) were from one city in the United States, so the results might not generalize to populations or nightlife scenes in other cities or countries. The study used a self-reported survey methodology, so respondents might have overestimated or underestimated their actual alcohol use and experiences with aggression.

[1] To be included in the sample, respondents needed to report regular use of alcohol mixed with energy drinks (AmED) and must have experienced at least one recent incident of a bar conflict (i.e., a verbal or physical altercation).

[3] The six types of bar aggression were measured on a six point scale (1 = “never” to 6 = “20+ times”) separately for occasions when drinking AmED and NCA. The types of aggression included: (1) pushing, grabbing or shoving, (2) slapping, kicking or biting, (3) hitting or punching, (4) throwing something, (5) threatening with a weapon, and (6) harming with a weapon.

Posted at 09:28 AM in The Drinking Report for Addiction Medicine (DRAM) | Permalink