The WAGER typically focuses on gambling and gambling-related harm, but gambling is increasingly converging with gaming. Within violent video games, gender-based violence is well documented, and its potential social implications, including higher tolerance of rape fantasies among men, have been previously documented and denounced. Similarly, people of color experience racialized violence in online gaming communities, and these experiences have social implications both online and in real life. A previous BASIS op-ed discussed a personal recounting of living at the intersection of Black womanhood. In this week’s WAGER, we explore Stephanie Ortiz’s study on the intersectionality of masculinity and being a person of color in an online gaming community.

What was the research question?
What are the strategies men of color use to cope with everyday racist trash talk on Xbox Live, and how is this process shaped by masculinity?

What did the researcher do?
Ortiz placed ads on Facebook and Tumblr seeking men of color who had experienced trash talking on Xbox Live. She chose the Xbox Live platform in order to expand on an earlier study of racism in online gaming communities. Ortiz recruited twelve self-identified, heterosexual men of color with whom she completed semi-structured interviews. Each interview lasted for 45 to 60 minutes. Ortiz focused her questions on the meanings these men attributed to online racist hate speech and the strategies they used in the face of it.

Ortiz used a thematic analysis approach. This means she looked at the data collected across all of the interviews to pair the patterns in the data within a racial formation framework.

What did she find?
Respondents believed they are targeted and racialized by White gamers who use these attacks to feel powerful. They believe harassment on Xbox Live began the moment their racial and ethnic identities were perceived as non-White, either through their avatar, voice or gamertag (username). Insults (“trash-talk”) could take on the form of overt racial slurs or attacks on cultures/religions (e.g., stating that Arabs have extremist beliefs which are behind the current negative state of the world). Respondents believed that Xbox Live allows for White men who feel powerless in their day-to-day lives to take back that power by exerting these racial attacks.

Respondents reported that when they sought coping strategies or advice from other gamers or family members, they felt invalidated and were told their experiences did not amount to real racism because they did not occur in the real world. The respondents spoke at length about their strategy of desensitization, emphasizing that it’s not that they didn’t care, but that desensitization helped them avoid sadness and/or feel strong. It’s important to note that the respondents indicated that they only turned to this strategy of desensitization after facing ridicule for initially seeking help and support, either within or outside the game.

Previous studies of Black women have found that Black women respond to gendered racism by turning to their social support structures. Women of color gamers report that they form and play within their own clans to avoid racist confrontations. However, men in the Ortiz study reported that they continue to play with strangers despite the racist attacks, suggesting that beliefs about masculinity play an important role in their responses. Through these repetitive cycles, the overt displays of racism are normalized and the men feel incapable of taking offense, considering the broader meaning of their attacks, reporting their antagonists, or even consulting friends and family without being humiliated and dismissed.

The respondents themselves reported taking part in the silencing culture. For instance, one long-time player was especially critical of new players who were distressed by racist attacks. His view, shared by the others in this cohort, was that all players need to “shut up and put up” with the attacks just like everyone else. Taking offense to racist attacks could lead to further ridicule by comrades. 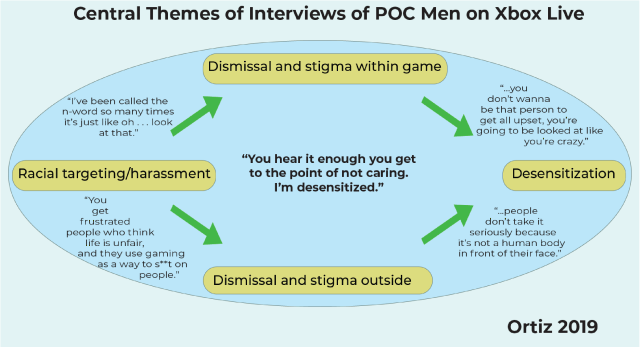 Figure. The figure shows the central themes Ortiz analysed from the semi-structured interviews with the men of color. Quotes were recorded from individual interviews. Click image to enlarge.

Why do these findings matter?
Social support curbs the harmful effects of racism. However, the men of color in this study (and in the broader gaming world, according to the respondents), don’t have the social support they need in the face of continual racist attacks. Instead, they feel forced to internalize their feelings and reactions towards racial slurs and interpersonal attacks in order to avoid the emotional work of processing the pain and anticipated ridicule from friends and family.

More care and consideration needs to be given to men of color gamers, as racist harassment and invalidation can lead to mental distress, mental/emotional fatigue, and in some cases substance misuse. And more research needs to explore how these online experiences of racism combine with in-person experiences to shape a person’s worldview and wellbeing.

White gamers who are offended by racism and want to help gamers of color can do so by naming racist attacks when they hear them and stating that they take offense. When privileged people intervene in this way, it helps the targets of racism understand that their experiences are valid and creates discomfort for the perpetrator.

Every study has limitations. What are the limitations in this study?
Only twelve men of color were interviewed for this study, and they self-selected into the study. Although many of their experiences were similar, the sample size and recruitment strategy mean that this study doesn’t necessarily represent the larger population of gamers of color. Additionally, there were not enough subjects within each racial/ethnic category to compare across racial/ethnic identities (e.g., those who identify primarily as Black vs. those who identify primarily as Latino). Future studies will have to look into how each sub-category may experience racism in the online gaming community differently.

For more information:
The effects of racism can be stressful on one’s mental health. If you or someone you know needs help proactively coping with race-related stress, visit Brown University’s page for recommendations.

Posted at 10:19 AM in The Worldwide Addiction Gambling Education Report (The WAGER) | Permalink