ASHES, Vol. 16(9) - Examining the link between adolescent marijuana use and cigarette smoking in adulthood

Over the past three decades, rates of youth cigarette smoking have declined substantially across the United States; however, there have been some recent increases in adolescent marijuana use. There is still limited research examining how marijuana use during one’s teenage years might influence future substance use patterns, including tobacco use. In this week’s ASHES, we review a longitudinal study by Trang Nguyen and colleagues that examined how marijuana use during adolescence might influence adult cigarette smoking, and whether there are differences in this relationship for males and females.

What were the research questions?
How does marijuana use during adolescence predict cigarette smoking during adulthood? Are there differences in this relationship for males and females?

What did the researchers do?
The researchers analyzed data on substance use behaviors from 2,928 women and 2,731 men in the nationally-representative Add Health dataset. They tested whether marijuana use1 at ages 16-18 predicted initiation (i.e., first lifetime use) of cigarette smoking at any time after age 18, until the end of the study period — when respondents were in their early 30s. To reduce the effects of confounding variables that might interfere with the results, the authors used propensity score weighting to balance the covariates2 between marijuana users and non-marijuana users. This approach simulates a randomized controlled experiment and is designed to make the results more accurate, valid and reliable. In order to test whether there might be gender differences, the authors conducted their analyses separately for males and females. 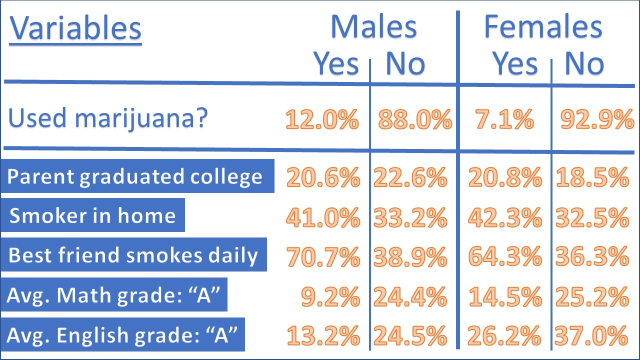 Figure: Percentages of males and females who reported using marijuana during adolescence. This figure also shows the percentage of these respondents who endorsed selected control measures (text with blue background) during adolescence. Percentages are reported separately for male marijuana users and non-users, as well as for female marijuana users and non-users. Click figure to enlarge.

Why do these findings matter?
These results have important implications for adolescent health, especially for female marijuana users, who may be particularly susceptible to using tobacco in adulthood. To help reduce tobacco and drug use more broadly, education policy makers and clinicians should consider school-based early intervention initiatives, which can help prevent initiation and escalation of substance use. These health promotion programs should include social media components tailored to adolescent populations, which can help to ensure that the program is both accessible and useful. Making educational content relevant to the audience and teaching evidence-based techniques that enhance communication and coping skills can also help to maximize the success of such programs.

Every study has limitations. What are the limitations in this study?
The study used a self-report survey methodology, so respondents in the Add Health dataset might have overestimated or underestimated their actual marijuana and tobacco use. Moreover, these results might not generalize to other countries or time periods, because they were based on one sample of adolescents from U.S. schools.

[1] To ensure that the marijuana use measure would not include very infrequent users, the authors identified a respondent as a “marijuana user” if they: 1) reported using marijuana at least once during the past 30 days and 2) reported having used marijuana three or more times in their lifetime.