« ASHES, Vol. 16(8) - All the cool kids are doing it: The relationship between ADHD symptoms, tobacco use and social perceptions of tobacco use during the transition to college | Main | The WAGER, Vol. 25(8) – Gambling in the time of COVID-19: Mental health, substance use, and financial distress among high-risk online gamblers »

The world has improved in recent years on many metrics-- fewer people are living in extreme poverty, dying from air pollution, or missing out on a basic education. One clear exception to this trend is opioid overdoses: The number of people who die each year from opioids nearly doubled between 2007 and 2017. With the opioid epidemic as the leading cause of death in the United States for adults under 50 years old, the scope of its catastrophic effects seems difficult to underestimate. And yet, the U.S. probably undercounts the true number of fatal opioid overdoses in the U.S. Over 20% of overdose deaths go unclassified each year, likely because coroners do not always have the expertise or resources to detect the presence of opioids in decedents. STASH reviews an study in which Andrew Boslett and colleagues compare various methods for estimating how many unclassified overdose deaths were caused by opioids.

What did the researchers do?
Using 1999-2016 data from the (U.S.) Centers for Disease Control and Prevention’s National Center for Health Statistics Detailed Multiple Cause of Death records, Boslett and his co-authors compared the relative importance of characteristics of the decedent (e.g., marital status), the presence of other factors that commonly contribute to opioid-related deaths (e.g., obesity), and characteristics of the county in which the death occurred (e.g., poverty rate) in predicting whether opioids were involved in an overdose death. The authors also compared two statistical methods for predicting opioid overdoses, logistic regression and random forests. Logistic regression performs best when there are linear relationships between predictors and outcome. For example, it could be that overdose deaths in poor counties are more often caused by opioids than overdose deaths in wealthy counties. Random forests excels at detecting complex relationships among the different pieces of information available to predict the outcome. For instance, perhaps dying by overdose in a poor area is only indicative of opioid use if the decedent was not married, was between the age of 20-30, and died during the weekend. After developing the algorithms using cases in which the substance involved in an overdose was specified, Boslett and his colleagues used the algorithms to make educated guesses about which unclassified overdose deaths involved opioids.

What did they find?
Including the presence of other common contributing causes of death (see Figure) and decedent characteristics in the models greatly improved the classification of overdose deaths as involving or not involving opioids. By contrast, county-level characteristics provided little added value. Random forests performed no better than logistic regression. The best algorithm found that 71.8%-- or just under 100,000-- of unclassified overdose deaths probably involved opioids. 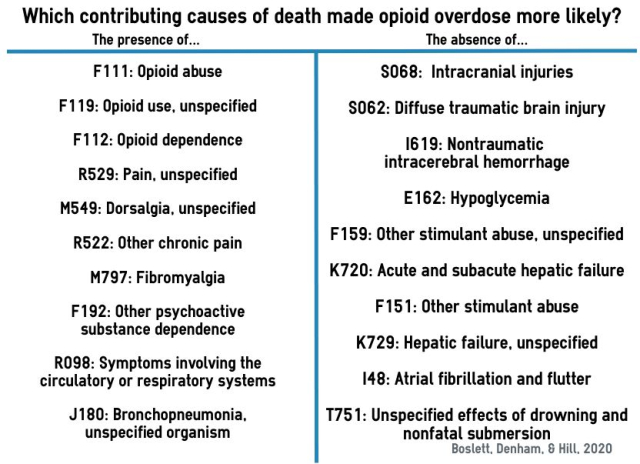 Figure. The International Classification of Diseases (ICD) codes that most strongly predict opioid involvement in overdose death. On the left are the ICD codes that are more common when opioids were involved in fatal overdoses; on the right are ICD codes that are usually not reported by coroners when opioids were involved in fatal overdoses. To learn more about a certain diagnosis, enter the alphanumeric code here.

Why do these findings matter?
Policymakers deciding how to use public funds should consider that the opioid epidemic may be 28% larger than official statistics indicate. To avoid underestimating opioid overdoses in the future, coroners need routine education and resources to detect opioid-related deaths. Finally, more complex algorithms may not be necessary for accurately estimating the true scope of the opioid epidemic.

Every study has limitations. What are the limitations of this study?
The authors only compared the performance of logistic regression on its own to random forests on its own. It may be that other algorithms, or combinations of algorithms, would have had better performance than logistic regression. Also, if there are characteristics of unclassified overdose deaths that make them more difficult for coroners to classify even with adequate training and resources, then algorithms that were developed on classified deaths may be less valid for predicting opioid involvement in overdose deaths of unspecified origin.

Posted at 09:54 AM in Science Threads on Addiction, Substance Use, and Health (STASH) | Permalink