« ASHES, Vol. 16(9) - Examining the link between adolescent marijuana use and cigarette smoking in adulthood | Main | The WAGER, Vol. 25(9) - How does personality relate to problem gambling? The mediating role of mindfulness in this relationship »

“But the man who comes back through the Door in the Wall will never be quite the same as the man who went out. He will be wiser but less cocksure, happier but less self-satisfied, humbler in acknowledging his ignorance yet better equipped to understand the relationship of words to things, of systematic reasoning to the unfathomable Mystery which it tries, forever vainly, to comprehend.” Aldous Huxley, The Doors of Perception

Huxley’s reflections on ingesting mescaline in 1953 has much in common with how many people talk about psychoactive drugs today, such as in the recent Netflix series The Midnight Gospel. But can substance use actually change your personality or your attitudes towards life? One recent paper found that festival-goers who had taken hallucinogenic drugs in the past 24 hours were more likely to report feeling positive and connected to others than festival-goers who had abstained. However, festival-goers who had taken hallucinogenics in the prior week were not more likely to report these positive outcomes than abstainers, suggesting that the effects wore off. To better establish whether there are lasting psychological effects of substance use, Lara Kroenecke and colleagues measured the same Dutch civilians several times over several years.

What were the research questions?
Do people who use more drugs on average report different levels of personality, self-esteem, or life satisfaction than those who tend to use fewer drugs? Do increases or decreases in a person’s typical substance use behavior cause changes in personality?

What did the researchers do?
The authors drew on 2007-2018 data from the Longitudinal Internet Studies for the Social Sciences, a longitudinal, nationally representative internet panel of the Dutch population.10,872 participants were followed on average for 4.25 years and and on average reported on their personality (specifically, a “Big Five” measure), life satisfaction, self-esteem, and substance use (specifically, tobacco, alcohol, sedatives, marijuana, ecstasy, hallucinogens, stimulants, cocaine, and heroin) three times. The researchers used multilevel modeling to estimate whether stable differences between participants in personality, life satisfaction, and substance use predicted stable differences between participants in substance use, and whether fluctuations in a person’s substance use on average predicted changes in that person’s personality, life satisfaction, or self-esteem.

What did they find?
The results suggest that, with a few exceptions, changes in how much a person uses substances does not change his or her personality, self-esteem, or life satisfaction. Rather, differences in personality traits, life satisfaction, and self-esteem between drug users and abstainers exist because preexisting differences in these characteristics dispose some people to take drugs and others to avoid them. For example, participants with higher levels of neuroticism (a tendency to experience negative emotions) consistently reported higher use of “hard drugs” (i.e., stimulants, heroin, and cocaine), but changes in hard drug use did not predict changes in neuroticism (see figure for all results regarding hard drugs). 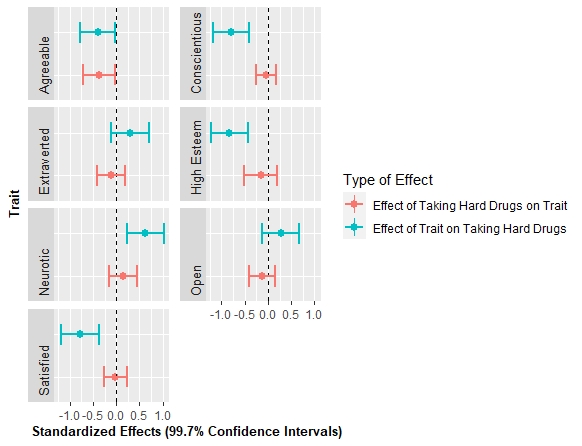 What do these findings matter?
The present findings speak against common beliefs that certain substances, such as hallucinogens, will have positive effects that last long beyond the period of intoxication itself. Conversely, the negative changes associated with substances such as alcohol or heroin also do not appear to have lasting impacts on psychological traits. Thus, treating substance use disorders should eliminate a substance’s acute behavioral effects, but probably will not change the attributes of a person who is discontinuing substance use.

Every study has limitations. What are the limitations of the study?
All variables were measured by self-report, which may be inaccurate due to inaccurate recall or social desirability bias. Also, the results only speak to the average effect of substances on what people are like, so it is still possible that idiosyncratic relationships between changes in substance use and changes in psychological traits exist.

Posted at 09:57 AM in Science Threads on Addiction, Substance Use, and Health (STASH) | Permalink