« ASHES, Vol. 16(10) - Are video games another marketing tool for the tobacco industry? | Main | The WAGER, Vol. 25(10) - The overlap between skin betting, other gambling activities, and problem gambling in children »

STASH, Vol. 16(10) - Is vaping really all that different? A qualitative study of recreational marijuana users’ experiences with vaping marijuana

In 2019, there was a nationwide public health crisis in the U.S. resulting from vaping-related lung injury. The Centers for Disease Control and Prevention (CDC) reported1 a total of 2,807 hospitalizations and sixty-eight confirmed deaths due to vaping, which was later found to be associated with an additive in vaping products called vitamin E acetate. Despite these alarming observations, there is still a lack of scientific research on marijuana vaping, including its health effects, motivations among users, and other potential consequences for those who vape. In this week’s STASH, we review a qualitative study by Elizabeth Aston and colleagues that examined perceptions of marijuana vaping among a sample of recreational marijuana users.

What were the research questions?
How do recreational marijuana users perceive vaping? Are there differences between perceptions of marijuana vaping and traditional modes of using marijuana?

What did the researchers do?
The researchers recruited 31 participants2 from Rhode Island and Massachusetts of ages 18-50 to take part in a focus group discussion and complete a questionnaire about their marijuana use. The focus group sessions included semi-structured group interviews with questions about marijuana smoking and vaping, as well as motivations and perceptions related to vaping. Each session was recorded and trained coders used a qualitative thematic analysis method to identify major ideas that appeared frequently during the focus groups. The researchers also reported basic statistics about the study participants and their marijuana use.

What did they find?
Study participants reported widely varying marijuana use patterns, with about 10% reporting using less than 1/16 ounce per week and 29% reporting using more than 1/4 ounce per week. They reported using marijuana on most days during the week, with an average spending of $129.20 on marijuana over the past 30 days (see figure). Participants shared a variety of different thoughts about marijuana use and vaporizing, which were found to coalesce around five major themes. These themes included perceived advantages of vaporizing marijuana: 1) convenience and discretion associated with marijuana vaporization, 2) efficiency associated with marijuana vaporization, and 3) perceived health benefits of vaporization. They also included perceived disadvantages of vaping marijuana, including: 4) absence of traditional smoking rituals and 5) the high cost of vaporization devices. 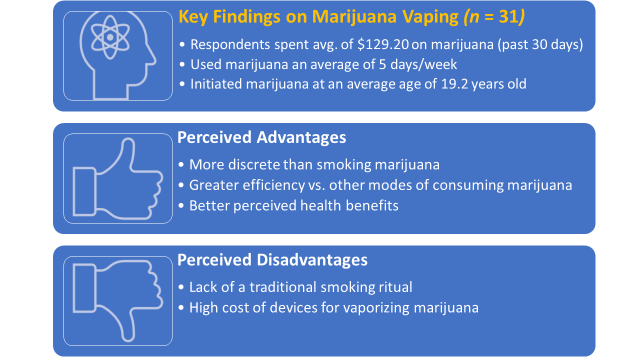 Why do these findings matter?
This study has important implications for public health policy related to marijuana and could be used to develop harm reduction efforts. For example, the finding that users are less likely to purchase vaporizers because they are expensive could inform studies of marijuana pricing and consumption patterns. Alcohol and tobacco excise taxes can reduce use and adverse health effects, suggesting that a similar association might be present for marijuana use. Perceived health benefits of marijuana vaporization are also important because they are often not based on scientific research—making it particularly important for future studies to measure the relationship between marijuana vaporization and health outcomes with a rigorous methodology (e.g., a randomized controlled trial).

Every study has limitations. What are the limitations in this study?
The study used a self-report methodology, so respondents in the focus groups might not have reported their use and perceptions of vaping accurately. Moreover, these results might not generalize to other marijuana users or time periods, as they were based on a sample of 31 individuals from 2015-2016.

[1] Because the number of cases steadily declined after determining that vitamin E acetate was the primary contributor to the lung injuries caused by vaping in THC-based products, these case and death counts are for the period between March 31, 2019 and February 18, 2020.

Posted at 10:38 AM in Science Threads on Addiction, Substance Use, and Health (STASH) | Permalink