« The WAGER, Vol. 25(9) - How does personality relate to problem gambling? The mediating role of mindfulness in this relationship | Main | Addiction & the Humanities - The portrayal of Gambling Disorder in Uncut Gems »

Sexual violence is any sexual act that happens without the victim’s freely given consent. Drinking alcohol often co-occurs with sexual violence; half of all incidents involve alcohol use by the victim, perpetrator, or both. This week, The DRAM reviews a study by Christal L. Badour and colleagues that examined gender differences in alcohol-related outcomes and recent sexual violence victimization or perpetration among adolescents.

What were the research questions?
Is past-year sexual violence (victimization and perpetration) associated with past-month binge drinking and past-year alcohol problems in a sample of high school students? Do these associations differ by gender?

What did the researchers do?
Students from 26 high schools (N = 16,992) participated in a cross-sectional survey about sexual violence and drinking. The survey asked participants how often, in the past year, they had perpetrated or experienced sexual violence overall, and for three sexual violence tactics: sexual coercion, physically forced sex, and drug/alcohol-facilitated or incapacitated sex. Participants also described any past-month binge drinking and past-year alcohol problems. Badour and colleagues used chi-square tests to determine gender differences in rates of sexual violence victimization and perpetration overall, and according to each tactic. They also used tests of effect modification to investigate gender as a modifier in the association between sexual violence victimization and perpetration and the two alcohol-related outcomes. 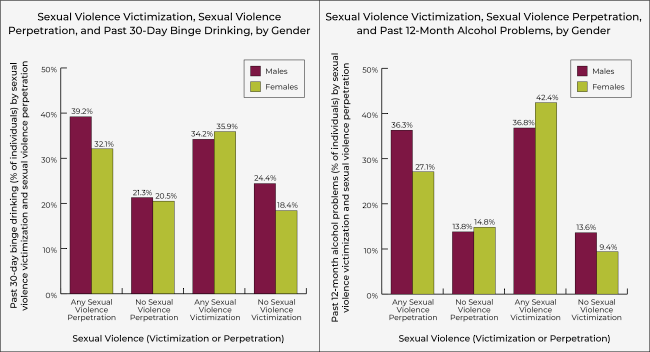 Why do these findings matter?
Sexual violence prevention and education strategies should include a component on safe alcohol use. However, future research is needed to understand the temporal relationship between sexual violence and alcohol-related outcomes; some kids might be drinking heavily to cope with sexual trauma. Gender differences, particularly in regards to drug/alcohol-facilitated or incapacitated sex and alcohol outcomes, indicate that there may be gender-specific risk factors associated with this sexual violence tactic. Prevention strategies should be tailored to address gender-specific risk factors.

Every study has limitations. What are the limitations of this study?
The cause-and-effect relationship between sexual violence and alcohol-related outcomes cannot be determined from this study due to its cross-sectional design. This study relies on self-report measures, which may introduce bias into the results. Study participants were from public high schools in one state, so results may not be generalizable.

For more information:
The National Institute on Alcohol Abuse and Alcoholism has tips and resources for people struggling with problem drinking. For additional drinking self-help tools, please visit The BASIS Addiction Resources page. The Rape, Abuse & Incest National Network has resources for sexual assault survivors and their loved ones.

Posted at 10:21 AM in The Drinking Report for Addiction Medicine (DRAM) | Permalink