« Addiction & the Humanities - The portrayal of Gambling Disorder in Uncut Gems | Main | STASH, Vol. 16(10) - Is vaping really all that different? A qualitative study of recreational marijuana users’ experiences with vaping marijuana »

ASHES, Vol. 16(10) - Are video games another marketing tool for the tobacco industry?

Since their conception, video games have become increasingly popular. So it makes sense that video games make an attractive medium for companies to promote their brands. But what about harmful products, like tobacco products? Have tobacco companies used video games for promotion? In this week’s ASHES, we review a qualitative study by Patricia McDaniel and Susan Forsyth that explored the tobacco industry’s use of video games as marketing and promotional tools throughout the years.

What was the research question?
How and why have tobacco companies employed video games to market their products to youth and adults from the 1980s and onward?

What did the researchers do?
As a result of multiple litigations, tobacco industry companies made an archive of nearly 15 million documents available in a searchable, full-text electronic repository. The researchers searched the repository for documents related to video games as marketing tools. They used key phrases like “video games” and “online gaming” to narrow down the search to 293 documents between 1980 to 2008. These included marketing and promotion documents, contracts between tobacco companies and video game makers, tobacco company requests for proposals for video game designs, and internal research on consumer behavior related to playing video games. They used a hermeneutic approach to identify central themes and thematic clusters, construct a timeline of events, and assemble a case study of the tobacco industry’s approaches to video games as marketing and branding tools.

What did they find?
Tobacco companies were exploring ways to capitalize on the “video game craze” as early as 1980 when Camel used a video game tournament as promotion for their brand among young adults (see Figure). Through the early 1980s, tobacco company marketing heads noted that there are fundamental features of the video game craze that their company could exploit – for example, packaging their products with space themes to capitalize on the popularity of space video games, or using existing video game contests for promotion.

In 1985, a Camel executive returned to the video game theme when trying to design brands to compete with Marlboro. These marketing ideas included video games as promotional tools such as branded games or advertising mediums in bars and clubs. They also considered marketing existing brands near arcades and other places where “younger-adult smokers ‘hang out.’” Marlboro began incorporating video games into bar promotions from the early 1990s onward and spent over $700,000 between 1997 and 2004 for 24 racing simulators. They applied Marlboro branding on the cars, monitor frames, and prizes. In order to play, gamers had to fill out a survey detailing their tobacco product use and provide contact information for other smokers willing to receive free cigarettes and incentives in the mail. They even enticed non-smokers to fill out the survey in order to play the game.

In 1999, when owning a personal computer started to become more common, there was a shift to incorporate tobacco product promotions into in-home video games. The tobacco company Doral began offering smokers large discounts on video games with proofs-of-purchase of their products. Others, like Winston, sought partnerships with video game makers for their own creations. By 2005, many major cigarette brands (e.g., Camel, KOOL, Winston) had websites that featured various video games (e.g., Camel Casino) in order to generate repeat traffic. These video game pages were often the most popular feature on the site, second only to their homepages. 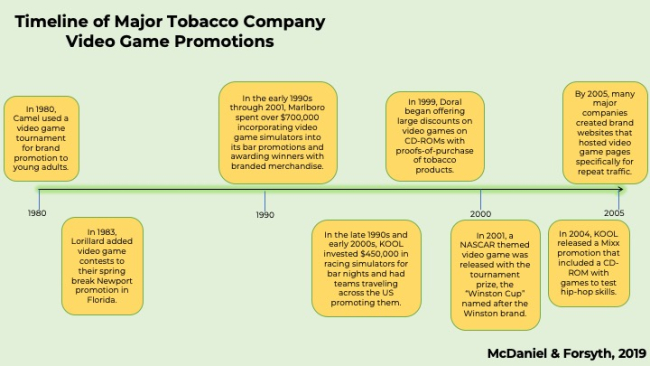 Why do these findings matter?
Tobacco companies have relied on video game branding and imagery for promotion for 30 years. Although overt tobacco branding may be frowned upon in 2020, many video games still include tobacco product imagery (e.g., Overwatch, Grand Theft Auto, Call of Duty). There is still very little research on the effects of tobacco imagery in video games and subsequent smoking behaviors. However, branded video games offer the potential of recurring brand exposure to players. Considering that exposure to tobacco marketing can create positive perceptions of smoking and encourage smoking initiation in youth, we should consider whether exposure from video games can do the same thing.

Every study has limitations. What are the limitations in this study?
The study is limited by the documents available in the public repository. It is possible there were additional documents that were destroyed or concealed by tobacco companies, or that were never obtained in the legal discovery process.