« Revisiting Stigma and Addiction, Again | Main | Are you building a responsible gambling-oriented culture? »

Marriage involves an intention to commit “in sickness and in health,” but tying the knot also has profound, unintended effects on health. How much people drink, for instance, is affected not only by their own taste for alcohol, but also by how much their partner drinks. And in today’s DRAM, we review a study by Jessica Salvatore and colleagues that investigated why in-laws with alcohol use disorder (AUD) can raise one’s own risk of developing AUD, even when one’s spouse does not have problems with alcohol.

Because about 50% of the variability in who has AUD is heritable, parents might pass risk for AUD on to their children via shared genes. A spouse’s genetic profile could increase one’s own probability of developing AUD even if the spouse does not actually have AUD. For example, a spouse with a genetically influenced penchant for making impulsive decisions―which promotes but does not inevitably result in AUD―could lead to sudden bouts of drinking, to which the partner is invited to join. However, it is also possible that an in-law’s AUD created a home environment that had lasting effects on the spouse’s personality. For instance, the spouse may have learned to tolerate drinking binges, eliminating a deterrent to drink excessively oneself. Finally, having an in-law with AUD may increase risk for AUD because interacting with him or her often results in alcohol consumption.

What was the research question?
Do in-laws who have ever had AUD increase one’s own risk of developing AUD? If so, is the added risk primarily conferred by (a) spouses who possess heritable risks for AUD, (b) how spouses’ personalities were affected by having had a parent with AUD, or (c) interactions with in-laws?

What did the researchers do?
Using data from Sweden’s national registry, the researchers pieced together information on over 300,000 Swedish opposite-sex couples in their first marriage. The researchers regarded a spouse as having a predisposition for AUD if his or her mother or father had ever had AUD. They used an actor-partner interdependence model to separate the influence of spousal characteristics and one’s own characteristics on risk for developing AUD.

What did they find?
The authors found that having an in-law who has had AUD increased one’s own likelihood of developing it within 10 years of marriage by 67%. This effect was independent of one’s spouse actually having AUD, which also increased risk. Also, living near an in-law with AUD was not associated with developing AUD, suggesting that interacting with an in-law who has AUD does account for the risk. In fact, an in-law’s AUD only increased one’s own AUD risk when the in-law actually raised one’s spouse. If the spouse had a biological parents with AUD but was raised by someone else, then one’s own AUD risk was not heightened. Thus, having an in-law with AUD does not increase one’s own risk via the spouse’s genetically influenced traits. More likely, an in-law with AUD created a home environment which affected the spouse in ways that now increase one’s own risk of developing AUD. See the Figure for all sources of AUD risk identified in the study. 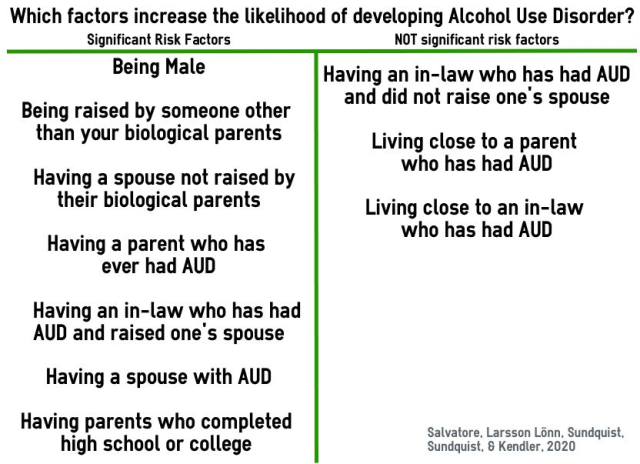 Why do these findings matter?
The societal burden of AUD is measured in terms of its effects on factors such as chronic disease, accidents, and loss in productivity. The current study underlines the intergenerational health consequences of AUD, which should be integrated into calculations of the public health risk that alcohol poses. Also, doctors often tell patients that they are at higher risk of AUD if someone in their own family has had AUD; this information can help people be especially vigilant about avoiding their own alcohol problems. The present study shows that patients should also consider their spouse’s family history of AUD.

Every study has limitations. What are the limitations in this study?
The researchers only had access to official records. Consequently, they were not able to measure what the psychological effects of growing up with a parent with AUD on the spouse were that eventually put their marriage partner at greater AUD risk. Also, the records do not distinguish between individuals with little or no risk for developing AUD from those who experience negative consequences from alcohol use, but do not yet have severe enough problems to qualify for an AUD diagnosis.