« The DRAM, Vol. 16(12) - How do we cope? The impact of COVID-19 stress on drinking | Main | Addiction & the Humanities - Are video games normalizing addictive behaviors? »

Australia passed the Tobacco Plain Packaging Act in 2011. Once the law was implemented in December 2012, tobacco companies were not allowed to brand cigarettes, cigars, and waterpipe tobacco using images, logos, or slogans. In addition, 70% of the front of tobacco packages had to contain graphic and verbal health warnings (an increase from 30%). Proponents of the regulation claimed that it would reduce tobacco consumption based on experimental evidence that branding increases product appeal and distracts consumers from warning labels. David Underwood and colleagues investigated whether the plain packaging mandate in Australia has had its intended effect.

What were the research questions?
Did the prevalence of smoking and amount of tobacco consumption decrease in Australia following a ban on branding tobacco products? Was this decrease over and above what one would expect given existing trends in tobacco use?

What did the researchers do?
Comparing tobacco use in Australia before and after the plain packaging law was implemented could yield spurious conclusions because the same factors that led to the legislation (e.g., increasingly negative sentiment towards tobacco) could have caused tobacco use to change even if the plain packaging law had not been passed. To rule out this confounding explanation, the authors used a ‘difference-in-differences’ approach by comparing the change in the percentage of people who smoke and the average number of cigarettes consumed per week among smokers in Australia after the plain packaging law was implemented to the change in tobacco consumption during the same time period in New Zealand, a country that is similar to Australia in many respects but did not implement plain packaging legislation until 2018. To account for ways in which the two countries might differ, the authors also included changes in Gross Domestic Product per capita, inflation, and population size in each country in their models. To run these models, they retrieved data from the Australian Bureau of Statistics and Statistics New Zealand Tatauranga.

What did they find?
The two countries had similar trends in tobacco consumption from 2002-2012, verifying a key assumption of the difference-in differences approach. Comparing that period to 2013-2017, the prevalence of smokers declined to similar extents in New Zealand and Australia, suggesting that the plain packaging law did not reduce the percentage of Australians who smoke. Expenditures on cigarettes did decline more in Australia than in New Zealand, though the authors attribute this to Australian consumers switching to cheaper brands (as more expensive brands had more appealing branding before the plain packaging law was implemented). This price drop would allow Australians to consume more tobacco with the same budget, which could explain why New Zealand had a larger drop in cigarettes consumed per week following Australia’s price packaging law (see figure). 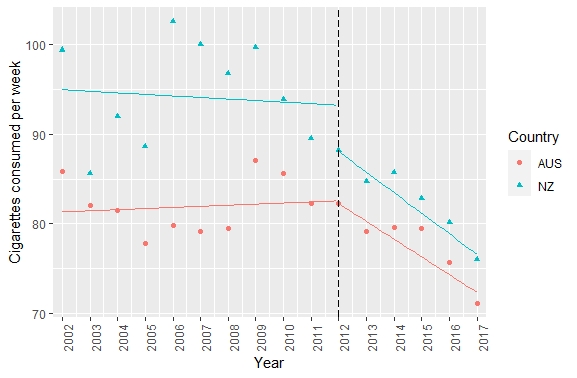 Figure. The trends in the number of cigarettes consumed per week in Australia (red circles) and New Zealand (blue triangles) by smokers before and after 2012, the year that Australia implemented the plain packaging law (represented by the vertical line). The difference-in-differences approach infers causality when the trend lines are similar before the law is implemented and are different afterwards. The shallower decline in cigarette consumption in Australia implies that plain packaging actually increased consumption by about six cigarettes per week. Click image to enlarge.

Why do these findings matter?
The results underline the fact that well-intentioned policies can backfire, even if their theoretical basis is supported in experimental settings. It could be that branding has a large impact on which brand of cigarettes people buy, but have negligible impact on whether they will buy cigarettes in the first place.

Every study has limitations. What are the limitations in this study?
New Zealand residents or policymakers who heard about Australia passing the plain packaging law could have altered their own behavior in response, in violation of the assumption that New Zealand was not affected by the legal change in Australia. Also, the non-profit Cancer Council Victoria argues that this study had several flaws, including failing to account for increases in tobacco taxes in New Zealand that were contemporaneous with Australia’s plain packaging law. Expect more studies and debates on the merits of plain packaging for years to come.

Sorry but if you scan the figure - the trend line on cigarettes consumer per week actually drops and drops dramatically after 2012. Yet you conclude: "The shallower decline in cigarette consumption in Australia implies that plain packaging actually increased consumption by about six cigarettes per week." I am missing something here?

The decrease looks more dramatic than it is because the authors fit separate regressions for before and after 2012. Putting that aside, there was a decrease in both countries, but New Zealand, the control group in this study, had a steeper decrease, implying that Australia's decrease would have been even steeper had they not passed the plain packaging law. (I am also putting aside here the critiques of the study by Cancer Center Victoria, which I believe are valid.)