“Stigma is the lack of respect for a person or a group of people because they have done something or have traits of which society disapproves. And stigma isn’t just an abstract concept – it’s present every day in how society perceives people with a substance use disorder.” - Michael Botticelli in The Brief Addiction Science Information Source

People living with a substance use disorder (SUD) are no strangers to stigma. A multinational study conducted by the World Health Organization found drug addiction to be more stigmatized than other social conditions, including criminal behavior and HIV positivity. Addiction-related stigma has harmful consequences. It can deter people from seeking and participating in treatment, contributing to low rates of SUD treatment utilization. Indigenous people in North America living with a SUD might experience heightened stigma, as painful stereotypes about alcohol misuse among Native communities endure. This week, in honor of Native American Heritage Month, STASH reviews a study by Emily Winters and Nick Harris that examined addiction-related stigma, and if the severity of stigma changed as a result of Indigenous identity and treatment seeking intention.

What did the researchers do?
The researchers developed four vignettes about “Jack,” a man with an alcohol use disorder who was recently charged with impaired driving. The vignettes were identical with the exception of two independent variables: Jack’s ethnicity (Caucasian vs. First Nations) and Jack’s treatment seeking behavior (seeking treatment vs. not seeking treatment). Four vignettes – one for each possible combination of independent variables – were created using factorial design.

The 711 study participants were randomly assigned to read one of the four vignettes and then completed an online questionnaire to assess stigma. The researchers assessed three outcome measures of stigma: the participant’s (1) perception of Jack’s unpredictability and incompetence, (2) desired amount of social distance from Jack, and (3) emotional response to Jack (e.g., empathetic vs. angry). The researchers used three factorial ANOVAs to determine the effect Jack’s ethnicity and Jack’s treatment seeking behavior had on each of the three outcome measures of stigma.

What did they find?
Participants stigmatized Jack to a greater extent when he was depicted as First Nations, compared to Caucasian (see Figure). Participants also responded with more stigmatizing attitudes when Jack was described as unwilling to seek treatment, compared to willing to seek treatment. First Nations ethnicity and an unwillingness to seek treatment were both associated with higher stigmatization for all three stigma outcome measures. When Jack was described as having either of these traits, participants viewed him as unpredictable and incompetent, wanted to be socially distanced from him, and were more likely to feel negative emotions towards him. 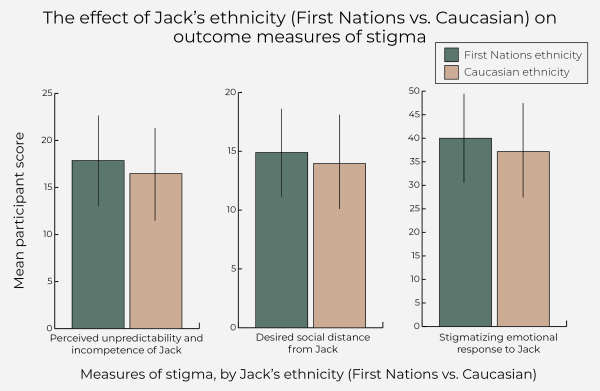 Figure. The effect of ethnicity on three outcome measures of stigma, by Jack’s ethnic identity (First Nations vs. Caucasian). Mean participant scores of perceived unpredictability and incompetence of Jack, desired social distance from Jack, and stigmatizing emotional response to Jack were higher among participants who read a vignette where Jack was described as First Nations compared to Caucasian. Click image to enlarge.

Why do these findings matter?
The devastating impacts of colonialism are still felt today. Oppression, marginalization, and the effects of historical and intergenerational trauma have contributed to health inequities for Indigenous people, including disproportionately higher rates of SUD. Particularly relevant to this study is the fact that Indigenous people are less likely than non-Indigenous people to seek treatment for mental health concerns. Findings from this study suggest that stigma – a significant barrier to accessing treatment – may be exacerbated specifically for individuals with a SUD who identify as Indigenous.

The public is generally unaware of colonialism and its implications for Indigenous populations. This fundamental lack of understanding has resulted in Indigenous populations being held responsible for their health inequities and has contributed to the perpetuation of harmful stereotypes (e.g., the ‘drunk Indian’). Large-scale anti-racist interventions (e.g., media campaigns and changes to school curricula) are needed to educate the general public about the history of colonialism and its impacts on Indigenous people and their health. Healthcare providers and other medical professionals should receive training on Indigenous mental health issues and practice trauma-informed care.

Anti-stigma interventions are needed to address the heightened stigmatization of individuals with a SUD who have not sought treatment. This increased stigmatization may be attributed to misconceptions about SUDs that shifts blame to the individual (e.g., addiction is a choice and a moral failing), making it difficult to understand why someone may not seek treatment. Framing addiction is a disease, using person-first language, and avoiding negative terms when discussing SUDs is important to combating misconceptions and stigma. Healthcare providers may benefit from receiving anti-stigma addiction training, and medical and nursing schools should consider embedding similar education into their curricula.

Every study has limitations. What are the limitations of this study?
Most participants were university students in Canada. The study findings may not be generalizable to other demographics (e.g., age or educational level) and to other countries, such as the United States.

Posted at 10:55 AM in Science Threads on Addiction, Substance Use, and Health (STASH) | Permalink