« Remembering Our First Issue of The WAGER: Celebrating 25 Years | Main | The WAGER, Vol. 26(1) - Is there a harm paradox among migrants who gamble? »

STASH, Vol. 17(1) - All the cool kids are doing it: The influence of peer pressure and emotional detachment on teenager’s early substance use initiation

Because teenage years are critical for brain development, substance use during this time can have significant impacts. In fact, early substance use has been identified as a risk factor for developing several different mental health disorders, such as conduct disorder, depression and substance dependence or addiction. Researchers have been working hard to explore what impact early substance use has. This week, STASH reviews a study by Martin Gallegos and colleagues that examined the role of emotional detachment from parents and peer pressure on the transition from alcohol, marijuana or tobacco use to the initiation of illicit substance use.

What was the research question?
What is the relationship between age of first substance use, emotional detachment from parents, susceptibility to peer pressure, and the transition from alcohol, marijuana and tobacco use to other illicit substance use?

What did the researchers do?
The researchers used data on Texas high school students who were sampled as part of a larger longitudinal study. Students completed questionnaires a total of 7 times, beginning in the spring of their 9th grade year and continuing through the spring of their 12th grade year. At all seven time points, students were asked about the age of their first tobacco use, and starting at the second time point they were asked about the age at which they first used alcohol and marijuana. In addition, students reported their perceived emotional detachment from their parents, perceived peer pressure, and other illicit substance use (cocaine, hallucinogenic drugs or any other illicit substance). The researchers used latent growth models to look at how the relationship between age of first alcohol use, age of first marijuana use, and age of first tobacco use, emotional detachment, peer pressure and illicit substance use. 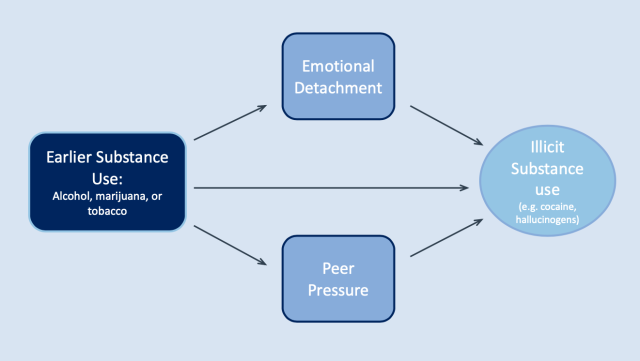 Why do these findings matter?
The American Academy of Pediatrics already recommends that pediatricians screen adolescents for substance use and provide referral to treatment and brief interventions when necessary. These findings indicate that such practices might help prevent later use of harmful illicit substances both directly, and indirectly by minimizing the risk for emotional detachment from parents and peer pressure. Some efforts have already been made to do this. For example, smokeScreen is a video game designed to improve adolescents’ knowledge of tobacco products and to help adolescents build skills to resist peer pressure.

Every study has limitations. What are the limitations of this study?
The sample only included students from a few school districts in Texas, so the findings may not be generalizable to the rest of the United States high school population or beyond. Future research could conduct a longitudinal study with a more geographically diverse population. It would also be interesting for future research to include other potential variables that might play a role in early substance use initiation, such as family substance use and other mental health variables.

Posted at 10:53 AM in Science Threads on Addiction, Substance Use, and Health (STASH) | Permalink