« The DRAM, Vol. 17(1) - Alcohol use disorder in those recovering from substance use | Main | Remembering Our First Issue of The WAGER: Celebrating 25 Years »

ASHES, Vol. 17(1) - Social media use by major tobacco companies in the United States: Are there differences based on the type of tobacco product?

Social media began as a way to manage personal social networks. Over time, it has expanded considerably as a platform for business and marketing. At the same time, there has been a growth in use of alternative tobacco products in recent years, such as e-cigarettes, hookah and smokeless tobacco. Despite these parallel trends, few studies have focused on understanding how tobacco companies use social media to reach current and potential customers. In this week’s ASHES, we review a study by Erin O’Brien and colleagues that examined how major tobacco brands in the United States use social media to reach potential users.

What did the researchers do?
The researchers first analyzed several market research studies of tobacco companies to create a list of the 112 major tobacco brands in the United States during 2017 and 2018. Next, they used these brand names as key terms to search Instagram, Facebook, Twitter, YouTube, Pinterest, and Tumblr for official brand pages, and then collected data on the characteristics of each page. These characteristics included: 1) presence of an age restriction or health warning, 2) page features, including whether the brand used hashtags1, 3) elements of the page’s content (e.g., whether it mentioned flavors), and 4) the number of followers for each page. The researchers used content analysis to summarize what they found.

What did they find?
E-cigarette brands were most likely to have a social media page, followed by hookah and cigar brands. Tobacco companies used Instagram, Facebook2, Twitter, and YouTube the most; Pinterest and Tumblr were less popular (see Figure). For all social media platforms, less than half of tobacco brands included either an age restriction or a health warning, with Facebook having the largest percentage with age restrictions (33% of brands on Facebook) and Instagram having the largest percentage with health warnings (36% of brands on Instagram). Pages on Instagram were most likely to use hashtags, and about one in four brand pages mentioned flavors on each platform. Facebook had the highest median number of brand followers overall, followed by Instagram and Twitter. 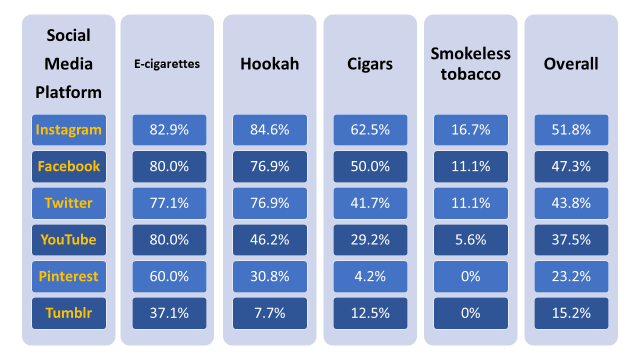 Why do these findings matter?
Tobacco companies have a considerable presence on social media platforms and engage in similar marketing approaches to companies in other market sectors. Whereas tobacco advertising has been severely restricted (e.g., in print media) or banned outright (e.g., in transit advertisements) in many countries, social media is mostly unrestricted, making it a potentially popular medium for tobacco advertising with little oversight. This type of advertising is particularly risky among young people, who spend a great deal of time on social media. Importantly, better automated tools such as age-gating (preventing access to pages for underage consumers) and prominent health warnings might serve as effective tools for reducing these risks related to tobacco brand advertising on social media.

Health professionals and addiction specialists have been increasingly focused on mental health as it pertains to COVID-19. They have assembled resources specific to COVID-19-related concerns, as well as resources on substance use in general, which can be found on the National Institute on Drug Abuse and Centers for Disease Control and Prevention websites.

[1] Hashtags refer to words or phrases appearing after a “#” symbol (e.g., #socialmedia), and are used to signify that a social media post is about a certain topic or theme. Hashtags are especially popular among young people and often follow pop culture trends, making their use on tobacco brand pages particularly risky for potentially promoting youth tobacco use.

[2] There was only one brand page for conventional cigarettes in the whole study, which was a page for Pall Mall cigarettes on Facebook. It is possible that cigarettes—which have traditionally been viewed as a more harmful tobacco product and have more stringent advertising standards—are restricted to a greater degree by social media companies, explaining the absence of brand pages.