« We Must Understand Youth Adversity to Address Adolescent Substance Use | Main | The Old Adage, “Addiction Does Not Discriminate,” Appears to be a Myth »

Editor's Note: In recognition of the ongoing importance of highlighting the vital contributions that Black academics make to addiction science, The BASIS is featuring the research and opinions of Black scholars of addiction. Today's review is part of our Black History Month Special Series.

What was the research question?
Are Black girls who feel socially supported, psychologically empowered, and proud of their ethnic identity less likely to use drugs, and in turn less likely to engage in sexual risk behavior?

What did the researchers do?
Data for this study was collected as part of a comprehensive needs assessment in an urban community in New Jersey to help create a program to prevent drug use and sexual risk behaviors among racial and ethnic minority youth. The researchers targeted students from eight public high schools. At each public school, they surveyed students from health and physical education classes. In total, 340 14–17-year-old Black girls completed a survey measuring social support in the adolescents’ lives, psychological empowerment, ethnic identity, sexual risk behavior, and past 30-day drug use.

The researchers used path analysis to evaluate the relationships among psychological empowerment, social support, and ethnic identity on sexual risk-taking behavior using past 30-day drug use as a mediator. This means they created a model testing the hypothesis that social support, psychological empowerment, and ethnic identity help reduce drug use and, in doing so, help reduce sexual risk behavior.

Author's Notes, Dr. Ijeoma Opara: “Building a case for why researchers should focus on strengths and internal processes such as empowerment was a challenge, as sexual health research among Black girls is often viewed through a deficit lens. I was tired of combing through articles that talked about risk factors, high prevalence rates of drug use, HIV and STIs among Black girls, without examining the strengths of Black girls who are engaging in healthy protective behaviors. My goal is to change the narrative of how Black youth, especially girls, are portrayed in research. By using strengths such as ethnic identity and empowerment that can be fostered by supportive structures, I want to develop prevention interventions that utilize strengths already present in Black families, communities, and youth.”

Author's Notes, Dr. Ijeoma Opara: “I was surprised at how relevant intrapersonal empowerment (leadership competency and policy control) was on drug use and sexual risk behavior. It motivated me to push back on the negative stereotype of Black girls being seen as bossy or intimidating and instead, encourage the nurturing or leadership and advocacy skills at an early age. This can have a direct impact on the behavior’s girls engage in and their health overall. Very little research has been conducted in this area and I believe these findings have the potential to reshape how we create prevention programs for Black girls.” 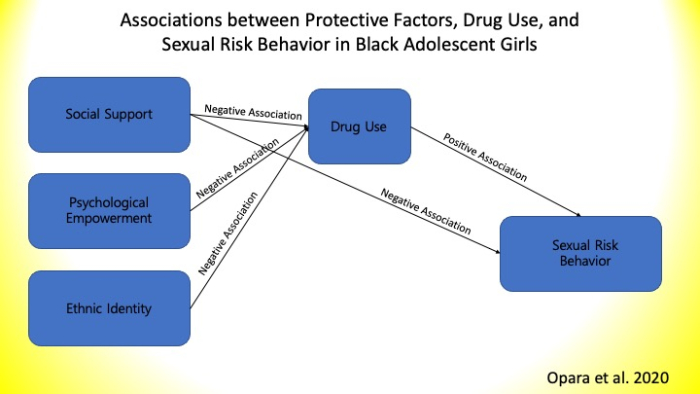 Figure. The figure shows the model used to determine the associations between social support, psychological empowerment, ethnic identity, drug use, and sexual risk behavior. All the pathways shown here were statistically significant. Click image to enlarge.

Every study has limitations. What are the limitations in this study?
This was a cross-sectional study; the participants reported on these factors all at once. Because of the nature of the study we can’t definitely conclude that certain factors caused changes in other factors. Additionally, adolescent Black girls are not a homogenous group. Various ethnicities (e.g. African and Caribbean) can cause significant differences within this group. A deeper study across multiple ethnicities could lead to more culturally specific and helpful prevention and intervention programs.

Posted at 08:30 AM in Science Threads on Addiction, Substance Use, and Health (STASH), Special Series | Permalink