« The Limitations of Context Neutral Prevention, Treatment and Recovery | Main | We Must Understand Youth Adversity to Address Adolescent Substance Use »

Editor's Note: In recognition of the ongoing importance of highlighting the vital contributions that Black academics make to addiction science, The BASIS is featuring the research and opinions of Black scholars of addiction. Today's review is part of our Black History Month Special Series.

More than 85% of Americans have access to the Internet and, not surprisingly, many of them use this global network for health information. Web-based health interventions have become increasingly popular, but little is known about who is using these programs – and who is not. Disparities in access, utilization, and skills related to the use of digital technologies (i.e., digital inequalities) exist across different demographic groups. This ‘digital divide’ may influence engagement with online health interventions. This week, as part of our Black History Month Special Series, we review a study by Monica Webb Hooper and colleagues that investigated racial/ethnic differences in engagement with a web-based tobacco cessation quitline program.

Author’s Notes, Dr. Monica Webb Hooper: “Face-to-face interventions are the foundation of tobacco cessation treatments, yield the highest effect sizes, and are preferred among African American adults. However, the pursuit of widespread intervention reach has facilitated a move toward digitizing health behavior change interventions. In doing so, it is important to avoid unintended consequences, such as widening cessation disparities. Populations disadvantaged by racial/ethnic minority status and lower education have historically had less internet access (i.e., the digital divide).”

What was the research question?
Does enrollment in and utilization of web-based tobacco cessation quitline services differ across racial/ethnic groups?

What did the researchers do?
The researchers obtained sociodemographic and service utilization data of 32,9891 enrollees of state-operated tobacco cessation quitlines in five U.S. states. Quitline services included both telephone-based and web-based options. Analyses included descriptive statistics and bivariate statistics to determine the relationship between race/ethnicity and measures of web-based service utilization. These measures included: (1) web-entry as method of contact initiation with the quitline (vs. fax, telephone, or other electronic methods), (2) enrollment in the web-only (Web Coach) program (vs. telephone services), (3) creation of a Web Coach online account following enrollment2, and (4) number of Web Coach account logins over 12 months.

Author’s Notes, Dr. Monica Webb Hooper: “Given the high concentration of tobacco users in underserved populations, this analysis focused on the selection, enrollment, and uptake of web-based cessation services across U.S. racial/ethnic groups. We analyzed data within the quitline context, since quitlines are available in all 50 states, deliver services at no cost, and increasingly provide online coaching.”

What did they find?
Eleven percent of all enrollees initiated contact with the quitline via the website (web-entry). Nearly 14% of the total sample enrolled in the web-only (Web Coach) program; slightly over half (55%) of these individuals created an online Web Coach account needed to receive services. The average user logged into the Web Coach account three times in a 12-month period.

Author’s Notes, Dr. Monica Webb Hooper: “Given my deep emic and research experience in minority health and health disparities, I was not surprised by the findings. Compared to White enrollees, African American, Hispanic, American Indian, and “other” persons were significantly less likely to request and enroll in a web-based tobacco cessation program.3 They preferred traditional telephone counseling. In addition, African American web-coaching enrollees were less likely to use the program even when they selected this option.” 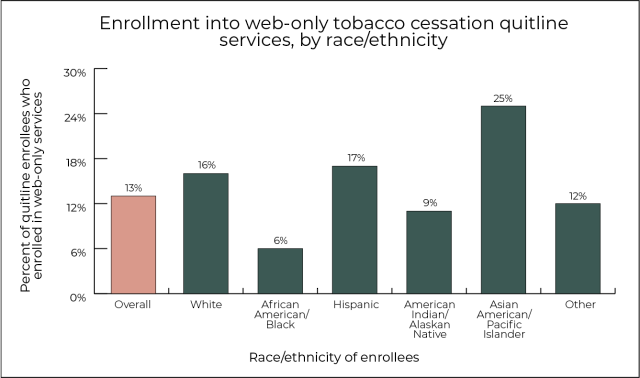 Figure. Percentage of total enrollees, by race/ethnicity, who enrolled in web-only services provided by the tobacco cessation quitline. Click image to enlarge.

Author’s Notes, Dr. Monica Webb Hooper: “Overall, our findings were suggestive of digital inequities by race/ethnicity. African American adult smokers tend to be less successful quitting, and as we advance digital interventions, it is important to consider population-specific preferences and engagement. These findings have implications for the development and implementation of culturally specific digital-based tobacco interventions for racial/ethnic minority communities.”

Every study has limitations. What are the limitations of this study?
This was a cross-sectional study. Therefore, the causality between race/ethnicity and web-based service utilization outcomes cannot be determined. Furthermore, although racial/ethnic differences in outcomes were observed, the researchers did not assess factors associated with these differences. Lastly, technology is rapidly changing. The findings provide a ‘snapshot’ of the association between these variables in 2015 but cannot tell us if this association still remains today.

For more information:
The National Institutes of Health (NIH) SmokeFree program has tips and resources for people who would like to explore options to help quit smoking. The Centers for Disease Control and Prevention offers information and tips about cigarettes and how to quit. For more information about addiction, visit our Addiction Resources page.

[2] After enrolling in the Web Coach program, participants were required to create an online account through the Web Coach website in order to begin receiving services.

[3] The researchers also tested the independent relationships between race/ethnicity and measures of web-based service utilization, controlling for other factors (i.e., sex, age, education, annual income, and location). African Americans, Hispanics, American Indians/Alaskan Natives, and individuals who identified as “other” were less likely than non-Hispanic Whites to enroll in the web-only program. Compared to non-Hispanic Whites, all racial/ethnic minorities were less likely to create a Web Coach account.