« STASH, Vol. 17(3) - The reciprocal relationship between substance use and insomnia | Main | The DRAM, Vol. 17(4) - Stressors of emerging adulthood, alcohol misuse, and drinking motives among young adult men and women »

The WAGER, Vol. 26(3) - A fine line: The investment-speculation-gambling spectrum

There is a sound distinction between gambling and traditional investing. However, some short-term, high risk stock activities, such as shorting stocks and day trading, seem to exist as a middle ground between gambling and longer term investment activities. One of these behaviors was recently thrust into the national spotlight with the Reddit short of Gamestop stock. Today, the BASIS summarizes a literature review and a survey by Jennifer Arthur and colleagues describing the relationship between investment, speculation, and gambling.

What was the research question?
What distinguishes investment, speculation, and gambling from one another?

What did the researchers do?
The researchers first conducted a literature review to summarize existing studies on investment, speculation, and gambling and learn how other researchers have defined and characterized these behaviors. Then they conducted a phone survey of 9,508 people in Australia, to assess people’s gambling and financial behaviors. This survey looked specifically at day trading instead of at speculation broadly. The researchers used logistic regression to determine how demographic characteristics, co-occurring health concerns, and gambling behaviors distinguished those who engaged in day trading from everyone else.

What did they find?
The literature review found that while gambling and investment have little overlap, speculation exists as a middle ground between the two. Speculation is like investment in terms of how people engage in it--by buying stocks, bonds, commodities, etc. However, speculation is like gambling in that both involve staking money or a recently-purchased asset, and a set outcome that is determined by a specific event (e.g., a Superbowl win). Some features, like time, risk, and the purchase of assets, varied based on the type of speculation and were not strongly related to either investment or gambling, but existed somewhere in between both. All three behaviors had common motivations of realizing financial gains for fun or excitement and common personality traits- sensation seeking, risk taking, and numeracy proficiency.

In their survey in Australia, the researchers validated this overlap and found that day traders were heavily involved in traditional gambling in addition to their financial speculation. Day traders were demographically distinct from gamblers who were not day traders, and more likely to engage in skill-based gambling activities like poker or sports betting. Day traders were more likely to be male, have higher income, be more educated, be married, report problem gambling, smoke less or not at all, and never purchase scratch tickets. Significantly, 91% of day traders had engaged in some form of traditional gambling in the past 12 months, compared to only 69% of the general population. 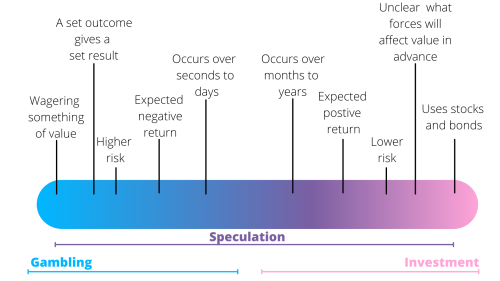 Why do these findings matter?
These findings begin to clarify the relationship between speculation and gambling, which has often been proposed but previously lacked empirical analysis. These relationships require validation before targeted interventions can be designed.

Every study has limitations. What are the limitations in this study?
In the survey in Australia, only 61 day traders responded with sufficient data to be included. This sample should be expanded and compared to other speculations, which were not as highly related to gambling, to ensure the results can be extrapolated.

Do you think you or someone you know has a gambling problem? Visit the National Council on Problem Gambling for screening tools and resources. For additional resources, including gambling and self-help tools, please visit The BASIS Addiction Resources page.

Posted at 11:57 AM in The Worldwide Addiction Gambling Education Report (The WAGER) | Permalink