« The DRAM, Vol. 17(3) - Would you like a bottled, draft, or inhalable beer? Examining emerging trends and risks of inhalable alcohol products | Main | STASH, Vol. 17(3) - The reciprocal relationship between substance use and insomnia »

Smoking traditional cigarettes causes poor sleep, which itself is associated with health consequences such as obesity, cardiac disease, and diabetes. Despite the fact that e-cigarette use is on the rise, no previous work has looked at the association between e-cigarette use, specifically, and quality of sleep. This is especially important since both traditional cigarettes and e-cigarettes contain nicotine, a stimulant drug. In this week’s ASHES, we review a study by Emma Brett and colleagues that examined the association between e-cigarette use and sleep health in college students.

What was the research question?
Is there an association between e-cigarette use status and patterns and poor sleep health?

What did the researchers do?
Students from a large midwestern university in the United States completed an online survey assessing sleep health and tobacco/nicotine product use. The sleep health measure assessed seven different components of sleep (e.g., subjective sleep quality, sleep duration, use of sleep medication). The researchers then assessed whether there was a difference in sleep scores (both global sleep health and the seven components) among those who had never used e-cigarettes, those who were current non-daily users of e-cigarettes, and those who were current daily users of e-cigarettes. (They excluded people who used both e-cigarettes and cigarettes.)1

What did they find?
Overall, 33% of participants had tried an e-cigarette at least once, 5.4% were non-daily users, and 2.5% were daily users; the rest had never tried them. The average global sleep health score across all participants was 5.8, or just slightly above the scale’s threshold for poor sleep health. Those who had never used e-cigarettes before reported significantly better sleep health compared to those who had used e-cigarettes before (both non-daily and daily). Specifically, users of e-cigarettes reported significantly lower subjective sleep quality (see Figure; note that lower scores on this scale represent better subjective sleep quality) and greater use of sleep medication compared to non-users. There were no significant differences in global or specific sleep health scores between non-daily e-cigarette users and daily e-cigarette users. 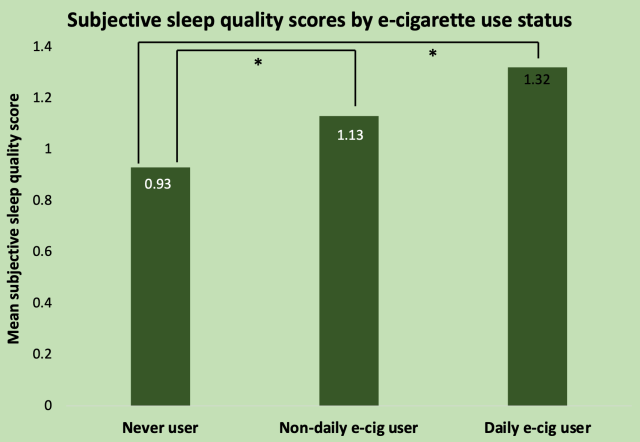 Why do these findings matter?
This is the first study to establish a relationship between e-cigarette use and negative sleep health. Its findings suggest that interventions to improve sleep health should target e-cigarette users in order to prevent negative health outcomes associated with long term sleep deprivation, which can even include increased cigarette smoking. Even providing e-cigarette smokers with tips to aid sleep, such as not drinking caffeine six hours before bedtime and avoiding screens right before bedtime, can be helpful. In addition, the findings suggest even greater urgency for helping regular e-cigarette users to cut back or even quit their e-cigarette use in order to avoid the long-term harmful effects of sleep deprivation.

[1] They included alcohol use and gender as covariates in all analyses.