The DRAM, Vol. 17(3) - Would you like a bottled, draft, or inhalable beer? Examining emerging trends and risks of inhalable alcohol products

For thousands of years, people have consumed alcohol (aka ethyl alcohol or ethanol) in beverages, such as beer, wine, and liquor. Alcohol that is drunk is processed first in the stomach and then in the liver. Alcohol inhalation is a new mode of alcohol consumption in which a person creates a vapor or mist containing ethanol, and then inhales it directly (often from a balloon). The ethanol bypasses the stomach and reaches the bloodstream more rapidly. Some media outlets have reported that it is popular among young people and is potentially more dangerous than other types of alcohol ingestion. However, very few scientific studies have investigated inhalable alcohol products or devices used to vaporize alcohol. In this week’s DRAM, we review a study by Adam Winstock and colleagues that examined usage trends and risks of this emerging way to consume alcohol.

What did the researchers do?
The researchers analyzed a large dataset from the 2020 Global Drug Survey, which included 110,557 people worldwide and asked questions about respondents’ alcohol consumption patterns, drug use, and a variety of other measures. Importantly, the sample was not representative of a particular population. Instead, it was designed to examine emerging trends in drug use and included drug users who might be difficult to sample with conventional means. For this study, the authors’ goals included: (1) estimating the prevalence of inhalable alcohol use across different demographic groups, (2) understanding the duration of intoxication of inhalable alcohol, and (3) assessing risk factors for and consequences of using inhalable alcohol.

What did they find?
The authors found that 803 respondents reported using inhalable alcohol at least once during the 12 months prior to the survey, representing only 0.9% of all respondents who were asked that survey question. Respondents ages 16-24 were more likely to have tried this type of alcohol as compared to those age 25+ (see Figure). Also, respondents who were classified as higher risk drinkers based on their AUDIT scores1 were more likely to have tried inhalable alcohol during the past year. Most people reported that the effects were short lived (i.e., lasting 1 to 5 minutes), yet 8% reported that the effects lasted for more than 1 hour. About 13 percent of respondents who inhaled alcohol reported falling over or injuring themselves shortly after the experience. 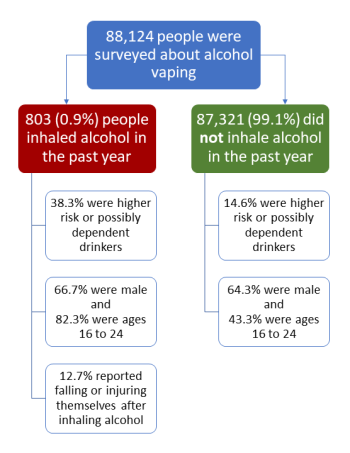 Figure. The prevalence of inhaling alcohol and characteristics of people who did or did not inhale alcohol during the past 12 months. Out of the 110,557 total respondents in the survey, only 88,124 actually answered the question about alcohol vaporization. All group differences were statistically significant except for the differences between males and females. Only respondents who reported inhaling alcohol were asked the question about falling or injuring one’s self. Click image to enlarge.

Why do these findings matter?
Adolescents and young adults are already more vulnerable to alcohol’s adverse effects, including dependence and alcohol use disorder. Their disproportionate use of inhaled alcohol might put them at even higher risk. The results also suggest that inhalable alcohol does have short-term risks, such as falling down and getting hurt, that might result from the faster onset of psychoactive effects when compared to alcohol that is drunk and metabolized in the stomach. More broadly, this study demonstrates the importance of scientific research into emerging substance use trends, which can help inform evidence-based recommendations to promote harm reduction (e.g., CDC directives on dangers of mixing alcohol and caffeine).

Every study has limitations. What are the limitations in this study?
Scientific inquiry into inhalable alcohol is very limited at this point, so additional studies should replicate these findings with other populations and with longitudinal methods (e.g., following up with people over time).

[1] The authors assessed risk for alcohol problems as of the date of the survey administration with the Alcohol Use Disorders Identification Test (AUDIT), which includes 10 items tapping various dimensions of problem drinking. The test results were then re-coded into an ordinal measure with categories including: (1) lower risk consumption, (2) increasing risk, (3) higher risk, and (4) possible alcohol dependence.

Posted at 12:01 PM in The Drinking Report for Addiction Medicine (DRAM) | Permalink