STASH, Vol. 17(3) - The reciprocal relationship between substance use and insomnia

Have you ever noticed that smoking cigarettes before bed makes it harder to fall asleep? Or felt a craving for nicotine to relieve grogginess? In this edition of STASH, we review an open-access study by Joëlle Pasman and colleagues that evaluated whether insomnia causes substance use and vice versa.

Surveys suggest that people with insomnia use substances like alcohol or cannabis to self-medicate. However, it is also possible that substance use makes it more difficult to sleep or that insomnia and substance use co-occur because of common causes such as stress. Establishing causal relationships between substance use and insomnia is difficult because, beyond mild, short-term inductions of sleep deprivation or substance use, it is not ethical or practical for researchers to manipulate substance use or sleep quality. Fortunately, it is possible to infer causality in observational studies using a technique called Mendelian randomization, which makes use of naturally occurring genetic variation between people.

What did the researchers do?
The authors drew on data from the UK biobank and 23andMe. Participants were genotyped and completed questionnaire measures of insomnia and substance use. The authors identified Single Nucleotide Polymorphisms (SNPs; i.e., changes in single DNA building blocks called nucleotides, some of which alter a gene’s effects) that were significantly correlated with each of these conditions to serve as instrumental variables (“instruments”).

An instrument is a variable that has a strong effect on the independent variable (e.g., insomnia), but has no direct influence on the dependent variable (e.g., smoking initiation). Mendelian randomization is based on the premise that genes are ideal instruments, as they are inherited randomly with respect to other genes (including genes that might have effects on the dependent variable). The authors statistically analyzed the instruments’ relationships with insomnia and substance use to draw conclusions about causal pathways. See the figure for a visualization of the assumptions underlying Mendelian Randomization.

What did they find?
Genetic instruments for insomnia had positive effects on all substance use outcomes except for alcohol use per week. However, the researchers found evidence of “pleiotropy,” whereby one gene causes multiple outcomes, in this case insomnia and substance use. Pleiotropy violates an assumption of Mendelian randomization. After restricting their analysis to SNPs that had a significantly larger effect on insomnia than substance use, the researchers found that only insomnia’s positive effect on smoking initiation was statistically significant. 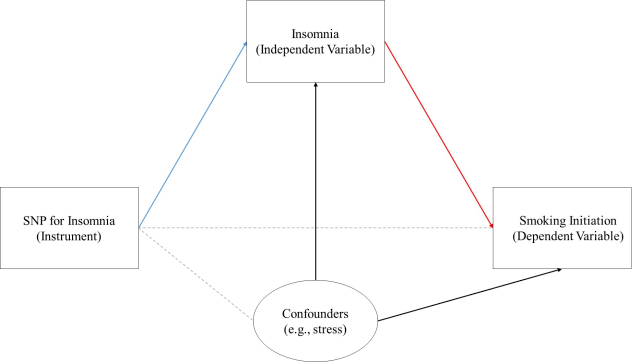 What do these findings matter?
Overall, there was suggestive but inconclusive evidence that insomnia causes a myriad of manifestations of substance use. The evidence was only conclusive for the effect of insomnia on smoking initiation. Smoking initiation was the only measured form of substance use that had support as a potential cause of insomnia, though the evidence here was also inconclusive. Understanding the potentially dynamic relationship between insomnia and substance use may help dampen the negative effects that they each have on physical and mental health. For instance, increasing access to treatment for insomnia may prevent patients from smoking tobacco to self-medicate. Conversely, understanding that much of the comorbidity of insomnia and substance use is due to shared genetic risk factors can help providers set realistic expectations about the downstream effects that treating insomnia will (not) have on substance use and vice versa.

Every study has limitations. What are the limitations of this study?
The use of self-report limits the accuracy of measures of substance use. Also, Mendelian randomization depends on several assumptions beyond the absence of pleiotropy that may be violated in practice. For example, the genetic instrument may be in linkage disequilibrium with respect to another gene that affects the dependent variable. The variability in results that the authors observed from relaxing these assumptions underlines the uncertainty inherent to any one application of Mendelian randomization.

Posted at 08:30 AM in Science Threads on Addiction, Substance Use, and Health (STASH) | Permalink