Emerging adulthood is a period of profound change during which young people are expected to become independent and take on increased responsibility. The transition to adulthood is marked by crucial developmental tasks, such as finding a partner and establishing a career. Chronic stress associated with these normative challenges might explain high levels of alcohol misuse among young people. Such a relationship might be mediated by specific drinking motives, such as to reduce negative emotions (i.e., coping motives) or to socialize (i.e., social motives). This week, The DRAM reviews a study by Chelsie D. Temmen and Lisa J. Crockett that explored gender differences in the relationship between normative developmental stressors, drinking motives, and alcohol misuse among young adults.

What was the research question?
Are there gender differences in the relationship between normative chronic stressors, drinking motives, and alcohol misuse among young adults?

What did the researchers do?
Participants were recruited during secondary school as part of a larger longitudinal study that included seven annual surveys administered through graduation and during young adulthood. Four hundred and forty-two participants were assessed at one time-point in young adulthood (ages 19-22) for: chronic occupational stress and chronic relationship stress,1 coping and social drinking motives,2 and alcohol misuse (i.e., negative consequences of drinking and binge drinking). They conducted a multiple group analysis to examine gender differences between occupational and relationship stress, drinking motives, and both forms of alcohol misuse.

Next, the authors looked for potential mediational relationships. Occupational stress was indirectly related to both types of alcohol misuse through coping and social drinking motives for men. Relationship stress was indirectly related to binge drinking through social motives for women. No significant effects of relationship stress were observed for men and no significant effects of occupational stress were observed for women. 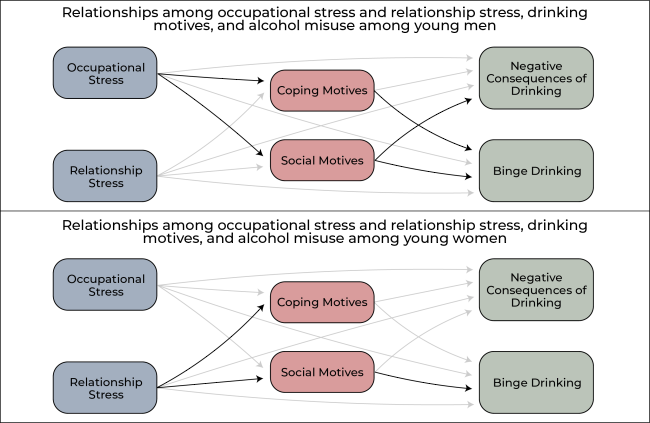 Why do these findings matter?
These findings indicate that employment challenges and relationship difficulties are both linked to drinking motives and alcohol misuse in young adults, but that this association differs for men and women. Gender differences may result from societal expectations driven by traditional gender roles. Interventions to reduce alcohol misuse should focus on mitigating the negative impacts of normative developmental stressors and be tailored to manage occupational stress among men and relationship stress among women. Drinking to cope with negative emotions and drinking as a means of socialization mediated the relationship between stress and alcohol misuse among men. Women only supported social drinking motives, indicating this may be a means by which women gain access to social support when stressed. Prevention efforts should discourage young adults from using alcohol for either reason.

Every study has limitations. What are the limitations of this study?
The majority of study participants identified as White, non-Hispanic young adults residing in the rural United States. Therefore, findings may not be generalizable to other populations, especially to places where gender roles are different. This study relied on self-report measures, which may introduce bias into the results. This was a cross-sectional study. Therefore, the causal direction of the association between alcohol misuse and stress cannot be determined.

Posted at 11:57 AM in The Drinking Report for Addiction Medicine (DRAM) | Permalink