« ASHES, Vol. 17(4) - Neighborhood influences on intent to quit smoking among Asian-American males | Main | The WAGER, Vol. 26(4) - Using the South Oaks Gambling Screen with older adults: Can it screen effectively in this population? »

STASH, Vol. 17(4) - Does high school drug use matter in adulthood?: Trends in adolescent and future young adulthood drug use across race and ethnicity

Adolescence is a period of rapid change and adjustment to new social situations, and often involves kids’ first use of drugs and alcohol. Although a large body of literature shows the adverse physical, psychological and social consequences of adolescent drug use, less is known about how adolescent drug use might influence future drug use in adulthood. In this week’s STASH, we review a study by Saijun Zhang and colleagues that examined how the use of different types of drugs in adolescence predicts future drug use in young adulthood, with key differences across race and ethnicity.

What were the research questions?
Which drugs do adolescents usually try first? Are there differences in future young adult drug use trends based on the first drug tried, or a respondent’s race or ethnicity?

What did the researchers do?
The researchers analyzed a large dataset from the National Survey on Drug Use and Health for 2015-2018, which included a sub-sample of 10,644 people in the United States who had reported past drug use. The survey asked questions about respondents’ current and past drug use1 (i.e., during adolescence and young adulthood), socio-demographic characteristics, and a variety of other measures. Importantly, the full sample was nationally representative of the population of non-institutionalized individuals age 12 and older in the U.S. For this study, the authors’ goals included: (1) assessing which drugs are typically tried first during adolescence, (2) examining how young adulthood drug use trajectories might differ based on the first drug tried, and (3) testing for differences in the first drug used and drug use trajectories in young adulthood across race and ethnicity.

What did they find?
About two-thirds of respondents who used drugs reported using marijuana as their first drug, and about one-quarter of respondents initiated their drug use with inhalants. The remaining respondents misused prescription drugs as their first drug use experience (see Figure), or tried hallucinogens or hard drugs first (i.e., cocaine, crack or methamphetamine). Looking at trends into young adulthood, whereas half of inhalant users subsequently tried another drug, almost two-thirds of other drug users subsequently tried another drug type. For the analyses by race and ethnicity, the results showed that whites and Hispanics were more likely than African Americans to try another drug in young adulthood. 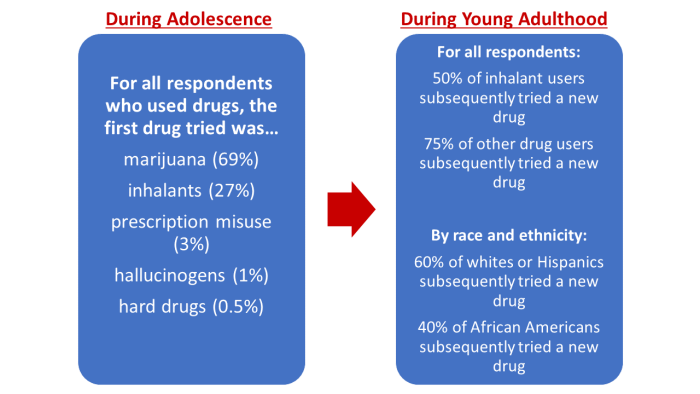 Figure. The figure shows the first drug used by respondents during adolescence among those who used drugs (N = 10,644). It also shows drug use trends in young adulthood based on each respondent’s first drug tried, and by race and ethnicity. “Hard drugs” include cocaine, crack or methamphetamine. Click image to enlarge.

Why do these findings matter?
Adolescents and young adults are already more vulnerable to drug use and are particularly susceptible to developing addictive behaviors, including alcohol use disorder and substance use disorder. Findings showing that a very small percentage of adolescents used harder drugs and not all continue into young adulthood are encouraging, yet the results still show that transitions to other—and potentially more dangerous—drugs can occur. Differences across race and ethnicity suggest that there might be distinctive risk and protective factors based on one’s socio-demographic background, which is consistent with health disparities research. For example, research suggests that family influences, and specifically mothers’ communication and closeness with their children, can act as a protective factor against substance use for African American girls. More broadly, this study demonstrates the importance of harm reduction programs for adolescents, such as regulatory measures (e.g., strict age restrictions for recreational marijuana); brief drug use screens in primary care settings; and early interventions, such as motivational interviews with students who use hard drugs.

Every study has limitations. What are the limitations in this study?
This study was based in the United States, so additional studies should replicate this study’s approach with other populations to determine if the findings hold cross-nationally. The National Survey on Drug Use and Health relies on retrospective accounts of past behavior based on a self-report methodology, and as a result, might suffer from incomplete or incorrect reporting.

[1] To measure the type of drug used and age of first use, the National Survey on Drug Use and Health asked each respondent to recall the types of drugs they had used in the past and the age at which they used each type of drug.

Posted at 11:19 AM in Science Threads on Addiction, Substance Use, and Health (STASH) | Permalink