« The DRAM, Vol. 17(4) - Stressors of emerging adulthood, alcohol misuse, and drinking motives among young adult men and women | Main | STASH, Vol. 17(4) - Does high school drug use matter in adulthood?: Trends in adolescent and future young adulthood drug use across race and ethnicity »

Some subpopulations in the United States, including Asian-American men with limited English proficiency, smoke at troublingly high rates. Asian Americans are not a monolith; a previous study found that Chinese-American smokers had less desire to quit smoking than Vietnamese-American smokers. While individual-level factors like language, education, and immigration status play a role in Asian Americans’ intent to quit smoking tobacco, environmental factors, such as tobacco retail density and median neighborhood household income, might be influential as well. This week, ASHES reviews a cross-sectional study by Priyanka Vyas and colleagues that looked at both individual and environmental-level factors on intent to quit smoking among Chinese- and Vietnamese-American male smokers.

What was the research question?
How are individual and environmental (neighborhood) factors associated with intention to quit smoking among Chinese and Vietnamese male daily smokers?

What did the researchers do?
Vyas and her colleagues examined baseline data from a smoking intervention research trial of 340 Chinese and Vietnamese male daily smokers. Participants were largely recruited from two populous counties in the Greater San Francisco Bay Area. At baseline, participants were asked whether or not they intended to quit smoking in the next 30 days. In addition, participants answered questions about their sociodemographics, education, annual income, years lived in the U.S., and various smoking characteristics (e.g., nicotine dependence and intensity of daily smoking). The researchers obtained neighborhood measures by geocoding the residential addresses of the participants. They coded for neighborhood median household income, percent of Chinese or Vietnamese residents, and number of tobacco retailers.

The researchers conducted two logistic regression models to compare the effects of individual factors vs. neighborhood factors on intention to quit smoking. They reported their results in odds ratios. 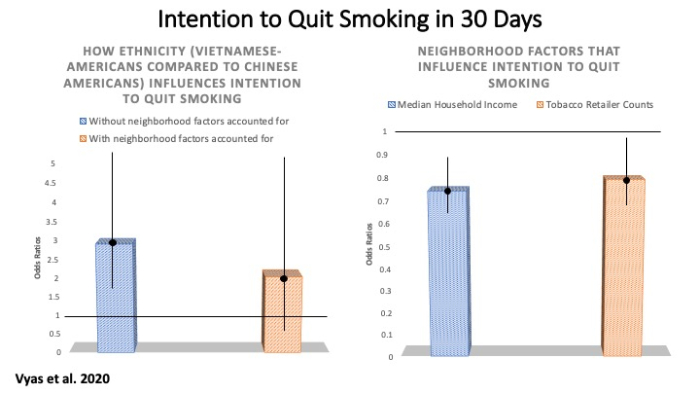 Why do these findings matter?
By including a focus on environmental factors, this study shows how neighborhood characteristics play a role in reinforcing individual behavior. Notably, the study’s findings suggests that the differences in intent to quit smoking between Chinese- and Vietnamese-Americans were mainly based on neighborhood factors rather than individual characteristics. These findings demonstrate the need to further understand the environmental factors that contribute to disparities within and between certain groups. Addressing tobacco-related health disparities solely by changing individual behaviors should be challenged and changed to include environmental and neighborhood factors. It is important for stakeholders to take a multi-faceted approach to holistically change peoples’ smoking habits and characteristics.

Every study has limitations. What are the limitations in this study?
This study was based on a subset of participants of a larger study that focused specifically on Chinese and Vietnamese men in two California counties. While the research team was recruiting participants, they introduced the study as being about smoking cessation and other health behaviors. Participants who decided to join the study could have been especially interested in quitting, leading to a non-representative sample. Additionally, the restricted recruitment means this study’s results are not generalizable to the national Asian-American male population.