« The DRAM, Vol. 17(5) - Run, don’t walk! To learn about the benefits of exercise on alcohol use disorder treatment | Main | STASH, Vol. 17(5) – The power of patient voice: Addressing provider stigma toward opioid use disorder through personal narrative »

Many find that the mintiness of menthol makes cigarette smoke easier to inhale and reduces its otherwise harsh taste. However, menthol-flavored cigarettes can provide false assurance about the health risks of smoking, are attractive to vulnerable groups such as adolescents, and might be harder to quit. As of January 1, 2017, Ontario, Canada banned flavored tobacco products, including menthol-flavored cigarettes. In this edition of ASHES, we review a study by Michael Chaiton and colleagues that examined this ban’s effects on menthol cigarette smokers two years later.

What was the research question?
Did Ontario’s ban on menthol-flavored cigarettes result in a long-term increase in smoking cessation among menthol smokers?

What did the researchers do?
The authors surveyed 1,821 smokers aged 16 and older in Ontario during the autumn of 2016, just before the menthol ban took effect. Participants reported whether they had smoked menthol-flavored cigarettes daily, occasionally, or not at all in the past year. Eight-hundred ten participants (44%) completed a follow-up survey between January and August 2019, while the ban was in effect. Participants reported whether they had attempted to quit smoking, and whether they had at some point relapsed in the past six months. The authors used Poisson regression to test whether occasional or daily menthol smokers were more likely than non-menthol smokers to (1) have quit smoking, (2) have had a larger number of quit attempts, and/or (3) to have relapsed from a quit attempt. 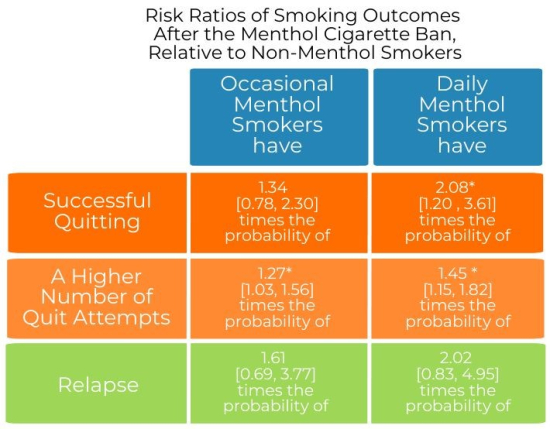 Figure. * = Statistically significant effect. The numbers in brackets represent the 95% confidence intervals around the risk ratio point estimates. To rule out confounding explanations, the authors included in the models several factors measured during the baseline survey, such as age, sex, education, race, number of cigarettes per day smoked at baseline, and the use of unflavored cigarettes at baseline. Click image to enlarge.

Why do these findings matter?
Many other jurisdictions have banned or are considering bans on menthol-flavored cigarettes. The positive long-term public health benefits of the Ontario ban could serve as a model for menthol bans elsewhere. Additionally, because the availability of unflavored cigarettes did not nullify the menthol ban’s effectiveness, perhaps other interventions which affect the experience of smoking may also be effective. For instance, mindfulness interventions that encourage increased attention to what cigarettes taste like have reduced their appeal for some people.