« STASH, Vol. 17(5) – The power of patient voice: Addressing provider stigma toward opioid use disorder through personal narrative | Main | The DRAM, Vol. 17(6) - Are Sexual Minority Youth at higher risk of experiencing suicidality when they drink? »

Many popular video games offer loot boxes that, when opened, give the player one or more randomly-generated items meant to enhance a player’s experience. Possibly because loot boxes can be bought with real money and have variable ratio reward structures, some researchers have observed that people who have engaged more with loot box mechanics are more likely to report problem gambling symptoms. Some countries are exploring regulating loot boxes like gambling. However, it is an open question whether the association with problem gambling is stronger or weaker depending on players’ engagement with different loot box features. This week, the WAGER reviews a study by David Zendle and colleagues that examined different features of loot boxes and their associations with problems with gambling.

What was the research question?
Does engagement with certain features of loot boxes strengthen or weaken the association between loot box engagement and problem gambling?

What did the researchers do?
Zendle and his colleagues conducted an online survey on spending habits in games via Amazon Mechanical Turk. They used the data from the first 1,200 respondents who: (1) had opened a loot box in the previous month, (2) responded to repeated questions with consistent answers1, and (3) listed a recognizable game when asked about which game had the loot boxes they had opened. The survey included the items from the Problem Gambling Severity Index (PGSI), questions about in-game options around the loot boxes (e.g., options to purchase loot boxes with cash, ability to sell loot box items to other players), and questions about respondents’ use of these options. They used moderation analysis to study if players’ engagement with various loot box features strengthened or weakened the link between loot box engagement and problem gambling severity. We review selected findings here.

What did the researchers find?
Zendle and his colleagues observed a positive association between loot box spending and problem gambling severity. The association was stronger when players played games in which they could trade loot box items with other players, sell items for cash (either within the game or outside of the game), or use in-game currency to purchase loot boxes. The strength of this association did not change depending on whether the players played games that (1) offered loot box items that made the player stronger or more competitive, (2) offered exclusive items that could only be acquired via loot boxes, or (3) featured “crate-and-key” mechanics where the loot boxes and keys to open them were separate in-game items. Contrary to the researchers’ expectations, the more money a player earned from selling loot box items, the lower the self-reported problem gambling severity (see Figure). 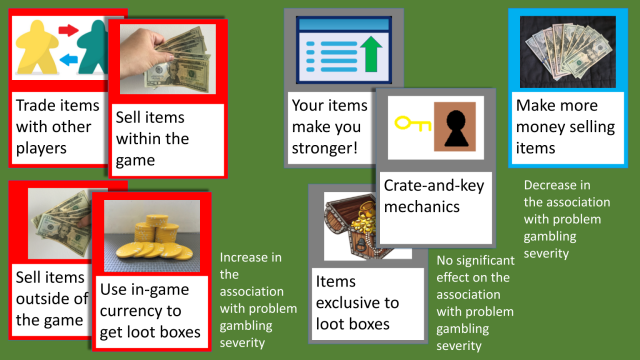 Figure. Loot box game features that increased (red), had no significant effect (grey) and decreased (blue) the association between loot box engagement and risks of problems with gambling. Click image to enlarge.

Why do these findings matter?
Loot boxes and the games that include them each have their own rules. It is similar to the way there is a wide variety of gambling games and formats. Some games and loot box mechanics might appeal more to those more at risk for problems with gambling, as other researchers have suggested. In this study, the association between loot box engagement and risk of problems with gambling was stronger when the loot boxes’ rewards could be more easily tied to money and monetary value. It is interesting that the amount earned selling loot box items was negatively associated with risk of problems with gambling. Perhaps those who made a lot of money were treating their time in the item marketplace as a business, similar to how some people buy and sell other game collectibles, such as Pokemon cards.

Every study has limitations. What are the limitations in this study?
The participants self-reported on their own loot box engagement, so recall bias may be an issue. Additionally, there are game mechanics that could be considered loot boxes that some players might not identify as such. For example, digital collectible card games such as Hearthstone and Magic: The Gathering Arena offer packs of random cards that players add to their collection/player account. These are essentially loot boxes, but players of these games generally don’t use the term. Players of these games might have unnecessarily excluded themselves from the study.

For more information:
David Zendle was a panelist in a discussion called “Gaming-gambling convergence II: Loot boxes.” It was part of the Technology, Risk and Gambling seminar series, and it can be found on YouTube.

Do you think you or someone you know has a gambling problem? Visit the National Council on Problem Gambling for screening tools and resources. For additional resources, including gambling and self-help tools, please visit The BASIS Addiction Resources page.

Posted at 01:33 PM in The Worldwide Addiction Gambling Education Report (The WAGER) | Permalink