What were the research questions?
Does the legalization of marijuana correspond to an increase in self-harm or assault injuries? If so, is the effect larger for recreational marijuana than medical marijuana, and/or for some demographic groups than others?

What did the researchers do?
The authors retrieved medical claims, including those based on incidents involving self-harm and assault, filed from 2003 to 2017 in the United States from Clinformatics Data Mart. They then retrieved changes in recreational and medical cannabis laws from publicly available sources. They represented state-level legal changes in the data analysis using a 5-level variable for increasing degrees of cannabis legalization (see Figure). 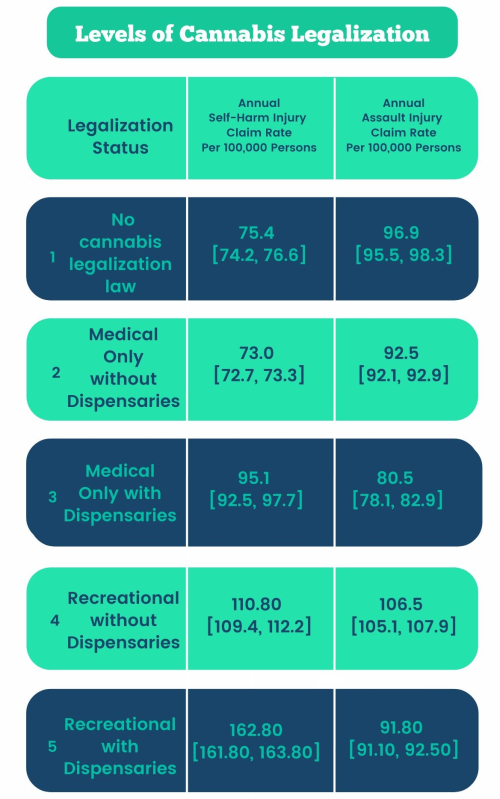 The authors used fixed-effect models to examine changes in monthly, state-level rates of injury claims caused by self-harm and assault as a function of degree of cannabis legalization. The main benefit of the fixed-effect approach is that it enabled the authors to statistically control for several factors even though they were not actually measured, including: (1) stable differences between states that could explain why some states consistently have higher rates of self-harm and assault than others (e.g., Montana consistently has higher rates of suicide than Massachusetts; the reasons for this are probably numerous), (2) yearly changes that affect all states similarly (e.g., more potent cannabis products), and (3) seasonality in rates of self-harm and assault (e.g., hot temperature is associated with more self-harm and assault). The authors also included controls for several other state-level variables that change over time, such as median income.

Overall, current evidence points to specific demographic groups that are at higher risk of experiencing self-harm or an assault injury as a result of legalizing recreational cannabis, but does not demonstrate an increased risk that generalizes across demographic groups.

Why do these findings matter?
The effect of recreational cannabis, but not medical cannabis, on self-harm suggests that the profit incentives inherent to commercialized industries could increase cannabis use (e.g., via increased advertising, more potent strains, etc.) in ways that make self-harm or assault injuries more common. The specificity of the results to younger males suggests a need for interventions that appeal to this subpopulation specifically. For instance, a recent randomized trial incorporated a smartphone app into an intervention for young adults who wanted to reduce their cannabis use. Participants reported that the app was helpful in reducing their cannabis use.

Every study has limitations. What are the limitations in this study?
Incidents of assault and self-harm involving individuals without private insurance are missing from the dataset, as well as incidents that did not result in a medical claim. Also, while fixed-effect models are highly useful, their validity depends on assumptions that are difficult to verify.

Posted at 11:08 AM in Science Threads on Addiction, Substance Use, and Health (STASH) | Permalink