« The DRAM Vol. 17(8) - The role of microaggressions against the LGBTQ+ community in young adult bisexual+ women’s alcohol use | Main | STASH, Vol. 17(8) – Accurate knowledge of a Good Samaritan law among people who use drugs »

Tobacco use is responsible for over 8 million deaths a year worldwide. The World Health Organization developed MPOWER guidelines for countries to use policy to reduce smoking among their residents (see figure). In an open-access study, Luisa Flor and her colleagues used data from the 2017 Global Burden of Disease study to estimate how many fewer smokers there were in 2017 than in 2009 as a result of countries’ increasing adherence to MPOWER guidelines.

What did the researchers do?
Flor and colleagues used a multilevel model to predict the country-level prevalence rate of smokers from 155 countries each year from 2009 to 2017. The independent variables were achievement scores given to each country by the World Health Organization (ranging from 1 for having no guideline to 5 for having the most strict guidelines) for the Protect people from tobacco smoke, Warn about the dangers of tobacco, Enforce bans on tobacco advertising, and Raise taxes on tobacco guidelines one year prior. (Interventions to Monitor tobacco use and Offer help to quit smoking were too uncommon to include in the analysis.) The authors used the results from this analysis to perform counterfactual simulations about how many fewer people would be smoking if achievement scores remained at their 2008 levels and if achievement scores had been at the highest level possible during the study period. 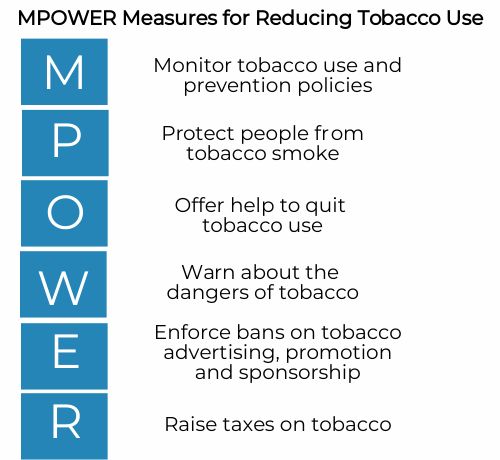 Figure. MPOWER is the acronym used by the World Health Organization for the guidelines that governments should follow to reduce tobacco-related health problems in their countries. Click image to enlarge.

Why do these findings matter?
The results add further evidence that top-down regulation is generally effective at reducing smoking. However, although the world is making progress in reducing smoking, reductions could have been much larger had countries been even more aggressive in restricting tobacco use. Advocating for legislation in accordance with MPOWER may be the most practical step to further reducing the negative health effects of tobacco.

Every study has limitations. What are the limitations of this study?
The MPOWER guidelines might not have caused people to stop smoking. Other related factors (specifically, confounds) might have played a role. One possible confound is changes in public opinion towards smoking, which could have both caused countries to pass tobacco restrictions and encouraged people to stop smoking regardless of guidelines. In reality we need both top-down and bottom-up efforts in place at the same time -- top-down policies instituted by governments and bottom-up/grassroots campaigns to change attitudes and beliefs about risky behavior. Also, the smoking prevalence estimates were based on surveys, which are prone to biases such as underreporting, which for tobacco use may be increasing over time.