The DRAM Vol. 17(8) - The role of microaggressions against the LGBTQ+ community in young adult bisexual+ women’s alcohol use

While stigma against the LGBTQ+ community has decreased in recent years, at least in the United States and other parts of the world, it still persists and impacts members of the community. Sometimes this takes the form of microaggressions: comments or actions that discreetly show prejudice towards the marginalized community. Microaggressions cause psychological distress and can lead to unhealthy coping mechanisms, such as drinking. This week, The DRAM reviews a study by Sarah Ehlke and colleagues that examined the role of microaggressions on bisexual+ women’s daily drinking behavior and the consequences of this drinking.

What was the research question?
How are microaggressions related to the drinking behavior of bisexual+ women?

What did they find?
The majority of the sample were white students who identified as bisexual. Participants reported drinking on 46% of the days and experiencing at least one microaggression on 41% of the days. On days when participants experienced microaggressions, they were more likely to report drinking, consuming more alcohol, and suffering more alcohol-related consequences.2 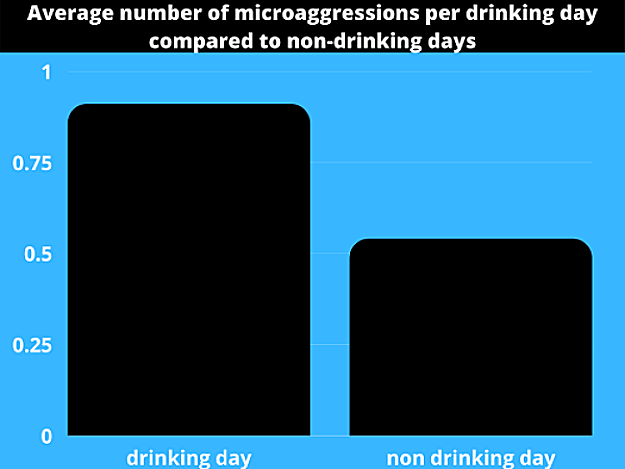 Why do these findings matter?
These findings suggest that microaggressions can have negative health consequences among those in the LGBTQ+ community. This study helps us understand why alcohol dependence and misuse are higher in the LGBTQ+ community. It also provides evidence of the need for culturally tailored interventions for LGBTQ+ individuals who may have a drinking problem. Such interventions might help LGBTQ+ individuals find healthier ways to cope with minority stress. Future studies might explore the best ways to challenge the beliefs and attitudes that give rise to microaggressions in the first place.

Every study has limitations. What are the limitations in this study?
This study had relatively narrow exclusion criteria, particularly in how participants needed to report at least two binge drinking episodes over the previous 30 days and had to experience at least one microaggression a week over the previous 30 days. Because of how the researchers selected the sample, the results might not apply to the bisexual+ population more broadly. Another large limitation of this study was its reliance on convenience sampling, which relies on participants to come to the researchers and thus may bias the sample towards more motivated individuals.

[1] Bisexual+ refers to anyone attracted to more than one gender or anyone for whom gender does not matter. The bisexual+ community includes people who identify as bisexual, pansexual, or sexually fluid among others.
[2] Elkhe and colleagues controlled for weekend days, aggregate levels of microaggressions, ethnicity, and relationship status.

Posted at 10:59 AM in The Drinking Report for Addiction Medicine (DRAM) | Permalink