« ASHES, Vol. 17(8) - Is the global push to reduce smoking working? | Main | The WAGER, Vol. 26(8) – Public perceptions of substance and behavioral addictions: Is there a difference? »

STASH, Vol. 17(8) – Accurate knowledge of a Good Samaritan law among people who use drugs

People who use illicit drugs (PWUD) are likely to experience or witness a drug overdose event but report hesitancy in involving emergency services for fear of legal repercussions. Drug-related Good Samaritan laws provide immunities and limited legal protections for individuals who call 911 – for themselves or for someone else – during an overdose event. These laws are intended to encourage calls to emergency services, but little is known about their knowledge among PWUD. This week, STASH reviews a study by Soroush Moallef and colleagues that evaluated the prevalence of and factors associated with accurate Good Samaritan law knowledge among PWUD in Vancouver, British Columbia.

What did the researchers do?
Canada enacted the Good Samaritan Drug Overdose Act (GSA) in 2017.1 The following year, Moallef and colleagues administered a questionnaire assessing GSA knowledge to PWUD participating in three ongoing prospective cohort studies in Vancouver, British Columbia. The questionnaire was completed by 1,258 PWUD. Participants were asked:

“Imagine you witness an overdose in a public place. 911 is called and the police come to the scene. Do you think the police can legally arrest you if: you have a small amount of drugs on you (Scenario A), you have a larger amount of drugs on you or items (scale, etc.) that may look like you are involved in drug dealing (Scenario B), and you are in a red/no-go zone (a legal area restriction) you received for a previous charge that was not simple drug possession (Scenario C).” 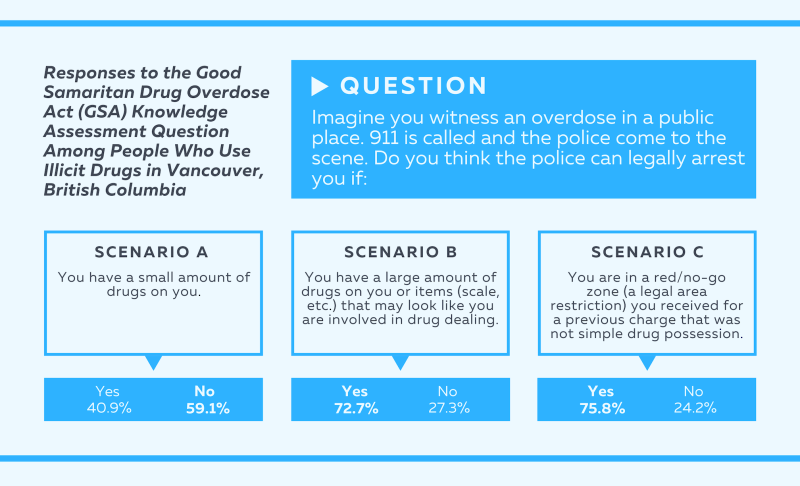 Why do these findings matter?
Accurate Good Samaritan law knowledge is associated with an increased likelihood of calling emergency services during an overdose event. This study found that three-quarters of PWUD surveyed did not have accurate knowledge of the Good Samaritan Drug Overdose Act (GSA), which is concerning because more than half of the respondents had witnessed a recent overdose. Additionally, one-third of participants overestimated GSA protections, putting them at risk for legal consequences which might perpetuate fear of emergency service involvement at overdose events. These findings indicate a need for targeted education about Good Samaritan laws for PWUD. Word-of-mouth from other PWUD and news/media have been found to be common means of learning among this population. Understanding of these laws was low among subpopulations of PWUD, such as individuals living in single-room occupancy accommodations where fatal overdoses commonly occur. Good Samaritan-related educational resources and interventions (e.g., tenant-led overdose response programs) should be implemented in these residences.

Every study has limitations. What are the limitations of this study?
Findings from this study may not be generalizable to other populations (e.g., non-PWUD) or geographic locations with different Good Samaritan laws (e.g., the United States).

For more information:
A 2021 Government Accountability Office report offers details about Good Samaritan laws in U.S. jurisdictions. Are you worried that you or someone you know has an addiction? The SAMHSA National Helpline is a free treatment and information service available 24/7. For more details about addiction, visit our Addiction Resources page.

Posted at 11:49 AM in Science Threads on Addiction, Substance Use, and Health (STASH) | Permalink