E-cigarette use, commonly referred to as vaping, has gained popularity in the past decade, particularly among young people. Because the human brain does not finish developing until the early to mid-20s, inhaling nicotine through e-cigarette devices can be especially harmful to youth. While tobacco cessation programs do exist, most follow the U.S. Public Health Service Guideline which was not created specifically for young e-cigarette users. This raises an important question: are the experiences of quitting smoking and quitting vaping the same, or different? This week, ASHES reviews a study by Sherald Sanchez and colleagues that examined this question.

What was the research question?
Among young people, are the experiences of quitting smoking and quitting vaping mostly the same or different?

What did the researchers do?
Using email, social media, and ads on university campuses in the Greater Toronto Area, the researchers recruited a total of 41 participants, including youth aged 16-18 and young adults aged 19-29, who vaped but had an interest in stopping. Participants provided their thoughts over a series of focus groups which the researchers recorded, transcribed, and analyzed using qualitative data analysis. Their goal was to identify common and unique themes between smoking and vaping, with regards to reasons for, and barriers to, cessation. Some participants might have never smoked (i.e., only vapers) but were still allowed to express their perceptions of quitting smoking during these focus groups.

What did they find?
Shared barriers to quitting included socialization and bonding with others who vape or smoke, reduced stress and anxiety, and the enjoyment of sensations (i.e., “head rush”) or habitual routines. There were also common similarities in reasons to quit vaping and smoking: monetary costs, feelings of “being used” by the tobacco industry, and dependence on the substance. However, participants also noted some unique barriers to quitting vaping. For example, participants reported problems with quitting due to the enjoyment of vape flavors, vaping’s accessible and inconspicuous nature, and an absence of control or awareness over vaping habits. Those who vape also did not see strong reasons for quitting due to the lack of conclusive, reliable research and information about vaping’s dangers, and the perception that vaping is more socially acceptable than smoking (see Figure). 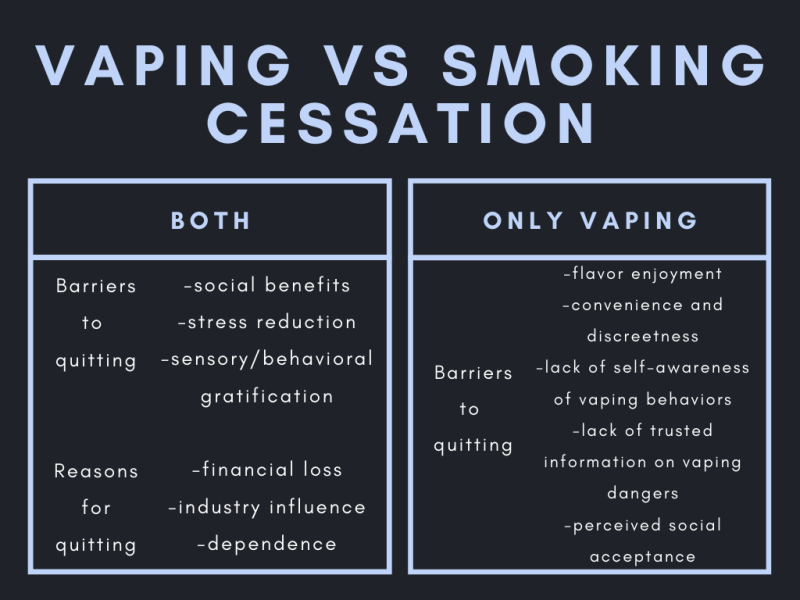 Why do these findings matter?
Besides the This is Quitting program created by Truth Initiative, which provides text-messaging support specifically for those trying to quit vaping, most other popular interventions are just general smoking cessation programs. These smoking cessation programs follow guidelines based on adults trying to cease smoking. This study reveals that we might need programs that address unique barriers and reasons for quitting to be more effective in successful cessation. Furthermore, because those who vape perceive vaping to be more socially acceptable than smoking and may want to separate themselves from smokers, they may be less likely to seek help from a program for general smoking cessation. These findings also suggest that many youth and young adults do not believe they are currently receiving concrete information on vaping. Future studies are important to produce trusted information on the long-term effects of vaping and inform cessation efforts.

Every study has limitations. What are the limitations of this study?
Because the sample only consisted of youth and young adults only within the Greater Toronto area, the results from this study are not necessarily representative or generalizable to individuals outside of this region. Participants were also specifically interested in vaping cessation, rather than vapers more generally. This study only looks at the differences between vaping and smoking perspectives, rather than the effectiveness of smoking cessation programs for vaping cessation.

For more information:
SmokeFree offers tools and tips for quitting and maintaining abstinence from smoking tobacco. The Talk With Your Teen About E-cigarettes tip sheet provides tips for parents to explain why e-cigarettes are harmful. The Centers for Disease Control and Prevention also provides research and tips about cigarettes and how to quit. For more details about addiction, visit our Addiction Resources page.