« ASHES, Vol. 17(9) - Are vaping and smoking similar, in terms of quitting? | Main | Introduction to the Special Series on Managing Addiction during COVID-19 »

STASH, Vol. 17(9) - The price of competition: How legalizing cannabis affects the street price of drugs

Where do people who use cannabis recreationally buy it? At first blush, the answer seems simple: People who live in places where purchasing cannabis is legal buy it at dispensaries, and people who do not live in such jurisdictions buy it on the illegal market. However, the reality is more complicated. Some consumers will only purchase cannabis if legal means to do so are available to them. Others have reasons to prefer the illegal market even when legal alternatives exist. For one, consumers may want to do “one-stop-shopping” for both legal and illegal substances. Second, illegal sellers could lower their prices for a competitive advantage over dispensaries. Dispensaries can only compete so much with the illegal market on price, because they must comply with regulations and charge state and local taxes. To explore these dynamics, Angélica Meinhofer and Adrian Rubli recently conducted a study in which they examine how prices of illegal drugs changed in states once they legalized the sale of recreational cannabis.

What was the research question?
What is the effect of legalizing recreational cannabis on prices of illegal drugs?

What did the researchers do?
The authors extracted the price of illegal cannabis from 2010-2019 using a crowdsourcing website. They derived potency-adjusted prices per gram of cocaine, heroin and methamphetamines from 2006-2019 using figures reported by the U.S. Drug Enforcement Agency. They collected dates of recreational cannabis law implementation from ProCon and news reports.

U.S. states that are otherwise similar have legalized recreational cannabis at different times. This allowed the authors to estimate the effects of legalization on prices using a difference-in-differences design. To eliminate the influence of state-level changes occurring around the same time as recreational cannabis legalization, the authors statistically controlled for factors such as new pain clinic laws and the introduction of medical cannabis dispensaries. They also used a fixed-effects approach, enabling them to remove the influence of stable differences between states, seasonality, and changes in drug policy or consumption that occur nationwide.

In contrast, the prices for most illegal drugs, including cocaine, heroin, and non-prescription oxycodone, significantly increased. This could have occurred for a myriad of reasons. For example, perhaps law enforcement diverted their attention away from the illegal cannabis market to the illegal market for other drugs, increasing transaction costs for illegal sellers, which they in turn passed onto consumers via higher prices. 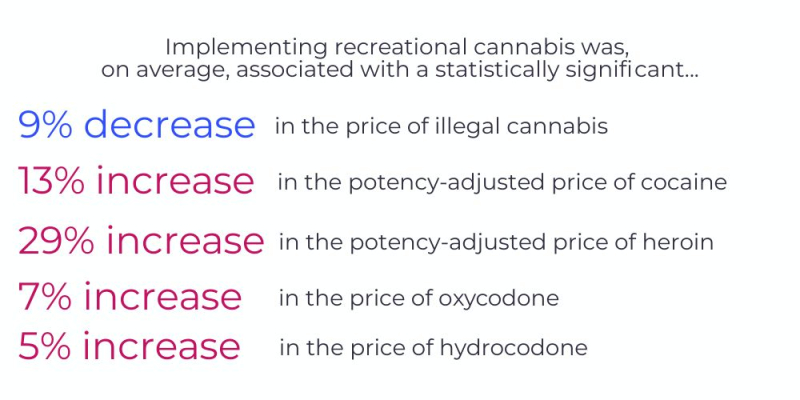 Figure. Price changes in morphine, amphetamines, and alprazolam were small and/or non-significant. Click image to enlarge.

Why do these findings matter?
Policymakers who desire to reduce the size of the illegal market could facilitate lower legal prices by reducing oversight of legal sellers, as regulatory compliance tends to increase costs. Also, the rise in price of other illegal drugs upon cannabis legalization could reflect unintended consequences of legalization (e.g., increased demand for drugs in general, consistent with the hypothesis that cannabis is a “gateway drug”).1 Measuring both intended and unintended consequences is crucial to understanding the full impact of recreational cannabis legalization.

Every study has limitations. What are the limitations in this study?
Several of the measures contain potential inaccuracies. For example, crowdsourced prices of illegal cannabis would be overestimated if people with less reliable internet access pay lower prices and are less likely to report prices online. Also, difference-in-difference analyses depend on assumptions that often do not strictly hold.

[1] Readers interested in whether there is evidence of marijuana serving as a gateway drug can learn more here.

Posted at 11:33 AM in Science Threads on Addiction, Substance Use, and Health (STASH) | Permalink