« The WAGER, Vol. 26(8) – Public perceptions of substance and behavioral addictions: Is there a difference? | Main | ASHES, Vol. 17(9) - Are vaping and smoking similar, in terms of quitting? »

Teens and young adults use and abuse alcohol more than any other substance. Adolescent alcohol use harms brain development and can lead to future problem drinking and alcohol dependence. Many popular youth television shows include mentions or depictions of alcohol and the average teenager watches television for almost two hours per day. Understanding the impact of television alcohol appearances on youth perceptions and behaviors is important to reduce adolescent risk for alcohol use disorder. This week, The DRAM reviews a study by Joy Gabrielli and colleagues that examined alcohol product placement within television series and its relationship to youth brand affiliation and drinking behaviors.

What did the researchers do?
The researchers analyzed secondary data from a 2012 national sample of youth ages 15-20 years. They selected ten popular television series from the 2009-2010 distribution season based on high viewership and popularity from the preceding season.1 The researchers intentionally chose series to represent a range of rating categories (TV-PG, TV-14, TV-MA) and included series with mature content. Two researchers watched all episodes from the selected series and seasons, noting every alcohol brand appearance. Participants reported any drinking and hazardous drinking, aspirational brand and usual brand to drink, and frequency with which they watched each of the ten television series.

The researchers combined the frequencies of watching each series with the frequency of alcohol brand appearances to create a brand exposure score. They counted the number of series that contained any appearance of a given brand to calculate a sum score. The researchers also assigned salience scores to each brand appearance to represent its notability. They then defined a brand’s prominence score as its average salience score times its sum score. The researchers used regression analyses, including logistic regression, to evaluate the associations between brand exposure, brand affiliation, brand prominence, and drinking outcomes.

What did they find?
Series that aired on cable television, such as Burn Notice and True Blood, had significantly more alcohol brand appearances compared to series on broadcast network television, such as 30 Rock and Friday Night Lights (3.38 vs. 0.16 appearances per episode). Alcohol brands more frequently shown across television series were more likely to be named by youth as brands they usually drink or aspire to drink. For example, Budweiser had the highest number of brand appearances overall (41), appeared in the most series (6), and was the most popular among youth (selected by 9% as aspirational and 5% as usual brand to drink). 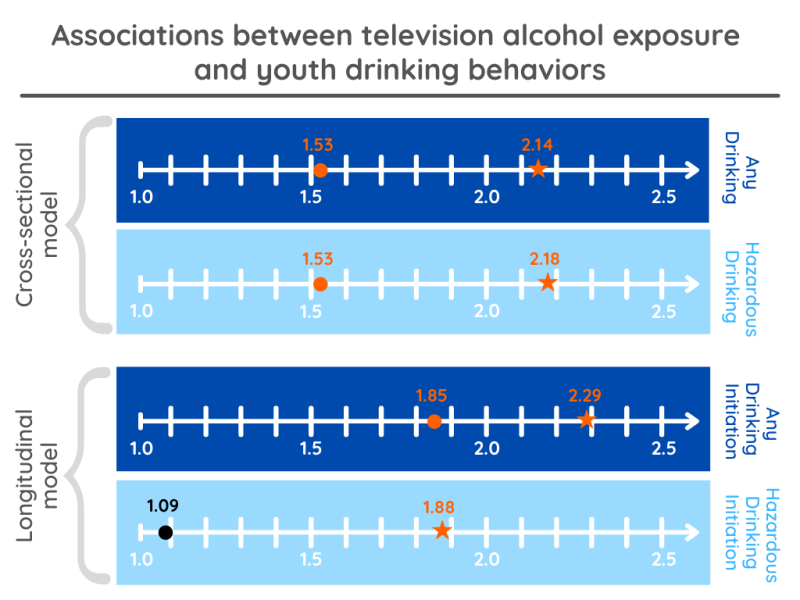 Why do these findings matter?
Youth are exposed to alcohol brands on television shows and this exposure is associated with brand affiliation and drinking behavior. Previous research found that youth are also highly exposed to alcohol in movies, Super Bowl advertisements, and digital media such as social networking sites. The lack of independent surveillance of alcohol marketing and product placement in entertainment media is concerning given the evidence for its relationship with youth drinking behavior. Through external regulations on alcohol marketing as well as parental monitoring and restricting of media content, reducing youth exposure to media depictions of alcohol can help mitigate the development and progression of youth drinking.

Every study has limitations. What are the limitations in this study?
Because the study analyzed cross-sectional data, it cannot be determined whether brand exposure caused the drinking behavior, simply that there is a relationship between the two. Researchers selected the television series by hand and only chose ten for this study, so the range of television shows watched by youth may not be fully represented. For example, the list contained no animated series. The selected television programs also aired over a decade ago. Although they are currently still accessible via streaming platforms, the current relevance of past television content is unclear.

For more information:
Parents, guardians, and other adults who want to have conversations with youth about alcohol, tobacco, and substance use can find information at TalkSooner. They provide drug facts, age-specific talking tips, and a glossary of drug-related terms.

The National Institute on Alcohol Abuse and Alcoholism also has tips and resources for people struggling with problem drinking. For additional drinking self-help tools, please visit our Addiction Resources page.

Posted at 11:37 AM in The Drinking Report for Addiction Medicine (DRAM) | Permalink