While heavy drinking on college campuses is a well-known public health issue, parents, administrators, and public health officials still struggle to sort through all the possible causes of this phenomenon. Due to the significant health and safety consequences of heavy drinking, particularly in student populations, this is an important research avenue. Like many other human behaviors, heavy college drinking probably results from a combination of factors--some that reside within the individual person (like expectations about the good and bad effects of drinking) and some that reside in the broader environment (like the prevalence of heavy drinking on campus). This week, The DRAM reviews a study by Allecia Reid on the impact of exposure to heavy drinking campuses and drinking beliefs/attitudes on drinking behavior and consequences in first-year college students.

What was the research question?
How does the prevalence of heavy drinking on a college campus and individual psychological/social differences impact individual student drinking behavior and consequences?

What did the researchers do?
AlcoholEdu is an alcohol intervention for first-year college students that is mandated at many college campuses throughout the U.S. One part of the intervention is a survey given twice--once about 3.5 weeks before students arrive on campus (Time 1) and again approximately two months later (Time 2). The researchers analyzed responses to twelve questions on the survey covering topics such as approval of alcohol use, expectations when using alcohol (including whether alcohol will enhance their sociability, impair their functioning, and other possible effects), campus expectations (joining sports, clubs, etc.), and consequences of alcohol use. They calculated the prevalence of heavy drinking on campus using the Time 2 alcohol consumption responses.

What did they find?
The percentage of heavy drinkers on campus was one of the strongest predictors of drinking heavily and experiencing consequences after arriving on campus. Specifically, for every 10% increase in the rate of heavy drinking on campus, participants had nearly 40% higher odds of reporting alcohol-related consequences. Participants who strongly approved of alcohol use, and expected it to make them more sociable and not to impair their functioning to a substantial degree, were also more likely to report consequences. Campus housing situations were also linked to alcohol use consequences (see Figure). 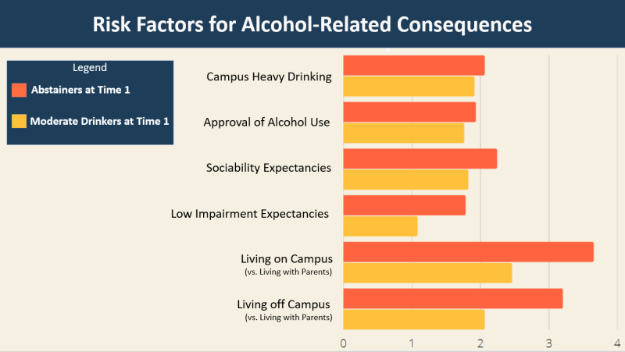 Why do these findings matter?
Studies like this help us better understand the causes of heavy drinking on college campuses. This study shows that while individual differences in alcohol opinion/expectations can impact college drinking behavior, the drinking norms of peers is also an important factor that needs to be addressed.

Every study has limitations. What are the limitations in this study?
Because the researchers did not use a validated scale to measure the variables, there may have been gaps between what the survey items actually measured and what the researchers intended. This study also only investigated the first two months of students’ behavior on campus--less than a full semester. Further studies should examine longer-term trends.

For more information:
Parents or guardians who are worried about their child’s drinking habits when moving to campus can find resources here for how to initiate a dialogue about drinking.

Students concerned about their own drinking habits can find support here. Those worried about the transition to college more generally can find tips to maintain a healthy lifestyle here.

Posted at 01:15 PM in The Drinking Report for Addiction Medicine (DRAM) | Permalink

I really appreciate the action you've taken in posting so many great resources.
However, I didn't see anything that specifically pertains to substance use prevention in the BIPOC community.
This guide does a great job of addressing this key issue for people of color *and* their allies:
Live Another Day - https://liveanotherday.org/bipoc/ - Extensive information on mental health and substance use resources for people of color. Their mission is equal access to life-saving resources.