« The DRAM, Vol. 18(1) – Planning vs. doing: Intended and actual use of alcohol-related protective behavioral strategies among college students | Main | STASH, Vol. 18(1) - Cannabis use to cope with race-related stress among incarcerated African American men »

Adolescent smoking (including e-cigarette use, or “vaping”) is a major public health concern, as nearly all tobacco use begins during youth and young adulthood. Early smoking initiation can lead to nicotine dependence and lung injury. Peer social networks influence adolescent health behavior choices, including smoking behaviors. This week, ASHES reviews a study by Georges E. Khalil and colleagues that examined the relationship between social network positions and smoking among teens in Scotland.

What was the research question?
What is the relationship between social network positions and smoking among adolescents?

What did the researchers do?
The researchers analyzed data from the Teenage Friends and Lifestyle Study, a 3-year longitudinal study of 160 secondary school students in Glasgow, Scotland. Participants reported whether they were a smoker. The researchers also measured participants’ social network1 positions: popularity (number of friendship nominations received2), proportion of friends who smoke, and a measure of closeness to all smokers in their network (e.g., a best friend, just a friend, a friend of a friend). They used logistic regression and path analysis to determine the relationship between each of the three social network positions and smoking behavior from year 1 to year 3.

What did they find?
Among all nonsmokers at year 1, those with more smokers in their social network, and those who were closer to smokers, were more likely to initiate smoking by year 3. This association was present even among nonsmokers without any close friends who smoked.

The reverse pattern also emerged; teens who smoked at year 1 had closer relationships with smokers by year 3 (see Figure). Year 1 smoking also predicted lower popularity by year 3, though popularity at year 1 did not predict smoking by year 3. 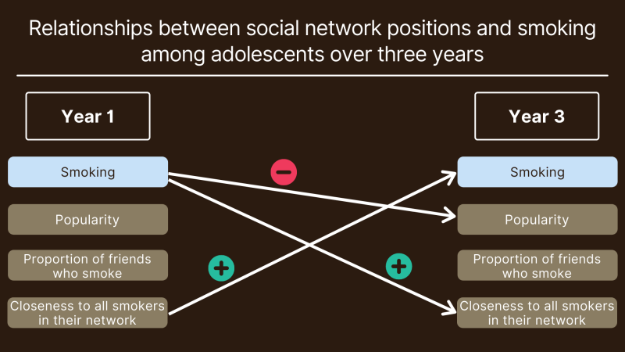 Figure. The relationships between social network positions (popularity, proportion of friends who smoke, closeness to all smokers in their network) and smoking among adolescents from Year 1 to Year 3. Arrows indicate significant pathways. Plus signs (+) indicate positive associations. Minus signs (-) indicate negative associations. Adapted from Khalil et al., 2021. Click image to enlarge.

Why do these findings matter?
Teens who have smokers in their social network are more likely to smoke, even among those who do not have close friends who smoke. These findings indicate that who is in one’s broader social network, rather than who is among one’s close friends, has a greater impact on smoking behavior. Thus, prevention strategies designed to target non-smoking teens should focus on decreasing proximity to smokers and increasing exposure to other nonsmokers, which could shift social norms and reduce adolescent smoking.

Every study has limitations. What are the limitations in this study?
This study analyzed self-reported data, which may be biased by social desirability and other related issues, such as how respondents defined smoking (i.e., whether “smoking” includes e-cigarettes and vaping). The sample was also limited to students who attended one school in Glasgow and were in their second year of secondary education at the start of the study, so the results may not be generalizable to teens in other cities or countries, teens who are not in school, or those of a different age.

[1] Social network refers to all friends and peers an individual interacts with and is not restricted to online social media use.