The DRAM, Vol. 18(1) – Planning vs. doing: Intended and actual use of alcohol-related protective behavioral strategies among college students

Many of us associate New Year’s Eve with heavy drinking and its consequences. On New Year’s or any other night, some people engage in protective behavioral strategies (PBS) to limit alcohol use and/or reduce negative consequences. Recent interventions have focused on using PBS among college students to reduce consequences associated with alcohol consumption among this population. But as anyone who’s struggled with a New Year’s resolution knows, plans don’t always amount to reality. This week, The DRAM reviews a study by Anne M. Fairlie and colleagues that examined the extent to which college students’ plans for using different types of PBS were associated with actual PBS use.

What were the research questions?
Are college students’ plans for using different types of drinking PBS associated with actual PBS use? Do drinking intentions moderate the strength of association between PBS plans and use?

What did the researchers do?
One hundred and eighty-nine college students participated in the study. Eligibility criteria included drinking two days a week in the past month and engaging in heavy episodic drinking in the past two weeks. The researchers administered twice-daily online surveys to participants across eight consecutive weekends. Participants completed afternoon surveys (Thursday–Saturday) to report their drinking intentions1 for that night and how likely they were to use 20 different PBS. The researchers separated these strategies into three categories: limiting/stopping drinking (e.g., stopping drinking at a predetermined time), controlling the manner of drinking (e.g., avoiding drinking games), and reducing chances for serious harm (e.g., using a designated driver). The following mornings (Friday–Sunday), participants reported the total number of drinks they had the night before and whether they used each of the PBS. The researchers used multilevel analyses to determine the relationship between drinking intentions and alcohol use and PBS plans and actual PBS use, for each PBS type.

What did they find?
Participants tended to follow through on their plans. On average, they reported plans to use, and reported actually using, at least one of each type of PBS during drinking days. Most commonly, they reported planning and using serious harm reduction strategies. Making a plan for using each type of PBS increased the likelihood of using that strategy later that night (see Figure, bottom row). Participants were more likely to use two types of PBS (limiting/stopping and serious harm reduction strategies) on days where they intended to drink more (see Figure, top row). Drinking intentions moderated the association between plans for using and actual use of limiting/stopping PBS; in other words, the association between plans to use and actual use of these strategies was stronger on days where participants planned to drink more. 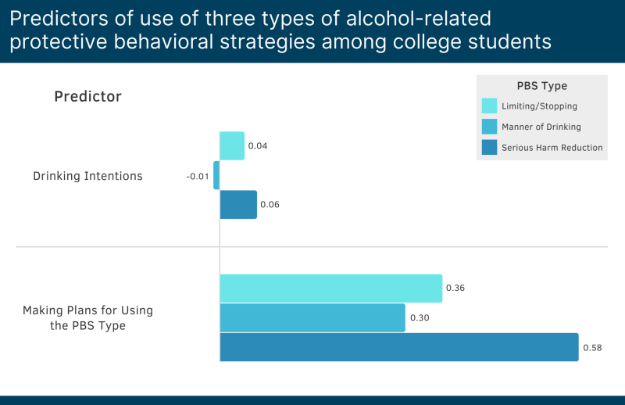 Every study has limitations. What are the limitations of this study?
This study was conducted with a sample of high-risk college students. Findings may not be generalizable to other populations (e.g., non-college students or lighter or infrequent drinkers). This study utilized self-reported data which may have introduced bias into the results.

Posted at 12:30 PM in The Drinking Report for Addiction Medicine (DRAM) | Permalink