Substance use disorders (SUD) are highly prevalent in incarcerated individuals. Recently released individuals have an elevated risk of death, especially from drug overdose, upon their reentry into the community. However, most formerly incarcerated individuals do not receive healthcare due to barriers such as discrimination and lack of insurance. This week, STASH reviews a study by Marguerite E. Burns and colleagues that evaluated prison-based Medicaid enrollment assistance and post-prison release healthcare use among adults with a history of substance use in Wisconsin.

What was the research question?
Is prison-based Medicaid enrollment assistance associated with increased use of healthcare within 30 days of prison release among adults with a history of substance use?

What did the researchers do?
The researchers compared data from before and after the Wisconsin Department of Corrections implemented a pre-release Medicaid enrollment assistance program1 for incarcerated adults in 2015. The study sample included over 16,300 adults (ages 19-64) who had a history of substance use and were released from a Wisconsin state prison between 2014 and 2016. The researchers examined healthcare use paid for by Medicaid within 30 days of prison release.

What did they find?
Participants released from prison after implementation of the Medicaid enrollment assistance program were more likely to access any outpatient care within 30 days of their prison release including outpatient care for substance use and Opioid Use Disorder specifically (see Figure). On the other hand, they were not more likely to visit the emergency department. 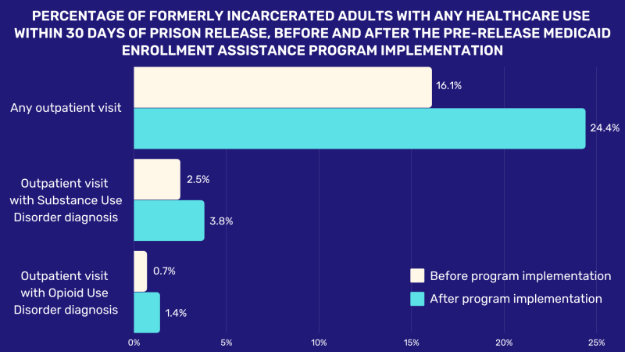 Why do these findings matter?
Providing Medicaid enrollment assistance to incarcerated individuals seems to increase use of outpatient care after release from prison. However, substance use-related outpatient visits were still low, especially considering the population’s history of substance use. Formerly incarcerated individuals may face other barriers to accessing care, such as limited health literacy, lack of transportation, and challenges in adjusting to post-prison life. In addition to enrollment assistance programs, improved coordination between prison and community health systems, as well as targeted interventions that connect formerly incarcerated individuals to prevention and treatment services, may help address these barriers.

Every study has limitations. What are the limitations in this study?
Because the study was limited to Wisconsin, findings may not be generalizable to other states or countries. This was also an observational study, so there could have been confounding due to outside events that occurred during the same period of time.

If you are worried that you or someone you know is experiencing addiction, the SAMHSA National Helpline is a free treatment and information service available 24/7. For more details about addiction, visit our Addiction Resources page.

[1] The pre-release Medicaid enrollment assistance program consisted of discharge planning staff providing guidance on how to apply for Medicaid, after which individuals were able to call an eligibility case worker to apply.

Posted at 09:05 AM in Science Threads on Addiction, Substance Use, and Health (STASH) | Permalink