What did the researchers do?
The researchers analyzed data from a sample of 8,165 daily cigarette smokers in four countries (Australia, Canada, England, and the United States). Respondents were asked to indicate whether they support five tobacco control policies: (1) ban on menthol in cigarettes, (2) ban on all cigarette additives, (3) reducing nicotine in cigarettes if other nicotine products were available, (4) raising the minimum legal age to purchase cigarettes to 21 years and older, and (5) requiring pictorial health warnings on cigarette packs (United States participants only).1 Respondents also reported their demographic characteristics, smoking behaviors (e.g., heaviness smoking index) and perceptions, and intentions to quit. The researchers calculated the prevalence rates for the level of support for each policy by country. They used logistic regression to examine differences in support for each policy by participant demographics and smoking variables. 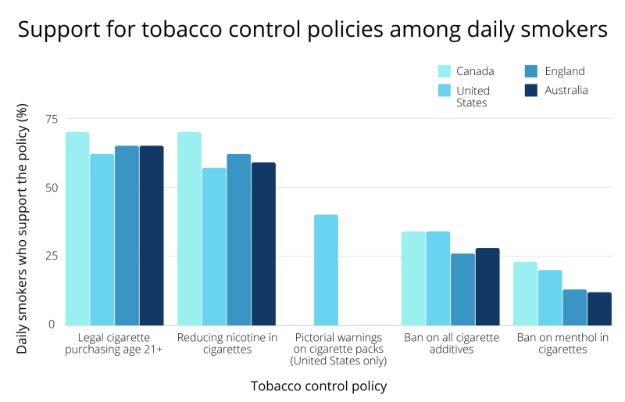 Why do these findings matter?
Policymakers take public attitudes into consideration when deciding how to intervene to change behavior, such as through tobacco control policies. Findings from this study demonstrate certain tobacco control policies have high acceptability, countering claims from lobbyists that these policies are unpopular. However, even for policies with lower support (e.g., banning menthol or other additives in cigarettes), the lack of support might be attributed to lack of general public understanding of the role of these factors in addiction. Correcting misunderstandings and increasing awareness of the benefits of such bans might increase support for these policies.

Every study has limitations. What are the limitations of this study?
Respondents might not have fully understood each policy or its implications. For example, limited awareness of the role menthol plays in addiction might influence support for this policy. High levels of support for raising the legal cigarette purchasing age to 21 years and older might simply be attributed to the majority of the sample being 25 years or older, and therefore not impacted by this particular policy. Finally, this study only examined daily smokers’ support of these policies but cannot be generalizable to non-smokers or infrequent smokers.

For more information:
SmokeFree offers tools and tips for quitting and maintaining abstinence from smoking tobacco. The Centers for Disease Control and Prevention also provides research and tips about cigarettes and how to quit. For additional self-help tools, please visit the BASIS Addiction Resources page.