« The WAGER, Vol. 27(3) - Reddit and the NFL: What can an online support community for problem gambling tell us about the impact of sports betting legalization? | Main | ASHES, Vol. 18(4) - “I don’t smoke, I JUUL”: Nicotine dependence among e-cigarette users compared to traditional smokers »

What was the research question?
How do children’s perceptions of situational drinking norms change from age 4 to 6, and do boys and girls differ in how their perceptions change over time?

What did the researchers do?
A total of 298 children from the Netherlands (ages between 4 and 6 at baseline) completed the Dutch electronic Appropriate Beverage Task annually for three years. The children saw drawings of adults in situations where drinking would be common (e.g., a party), uncommon (e.g., the office), or ambivalent (e.g., camping), and they were asked what the adults were drinking. The researchers used three-level regression models to learn how children’s attributions of alcohol changed over time. 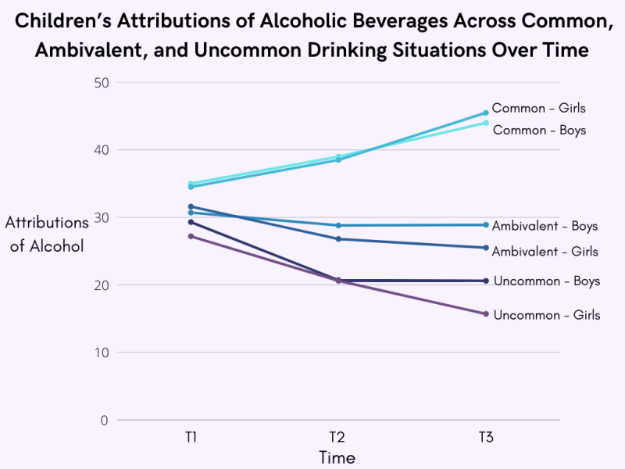 Figure. Children’s associations of alcoholic beverages across common, ambivalent, and uncommon situations as they got older (from T1 to T3).

Why do these findings matter?
Prior research suggests that the foundational understanding of future drinking patterns is established at a young age. It is important to understand how alcohol-related perceptions develop over time and use these findings to develop early prevention or intervention measures. The lack of differences between boys and girls was surprising given other studies suggesting sex differences in the development of alcohol-related cognitions beyond situational drinking conventions. The researchers suggest a need to look at gender identity, rather than a biological determination of sex or gender, and its relation to drinking-related cognitions.

Every study has limitations. What are the limitations of this study?
This study may not be generalizable to other countries because of varying cultural definitions of common, ambivalent, and uncommon drinking situations. The study had low recruitment rates, which is common in school-based studies.

For more information:
Parents, guardians, and other adults who want to have conversations with youth about alcohol, tobacco, and substance use can find information at TalkSooner. They provide drug facts, age-specific talking tips, and a glossary of drug-related terms.

The National Institute on Alcohol Abuse and Alcoholism also has tips and resources for people struggling with problem drinking. For additional drinking self-help tools, please visit our Addiction Resources page.

Posted at 09:50 AM in The Drinking Report for Addiction Medicine (DRAM) | Permalink